First self-driving lorry is ready to hit the road

The giant vehicle is approved for use in Nevada - but a driver is still needed for more complicated driving and city streets. 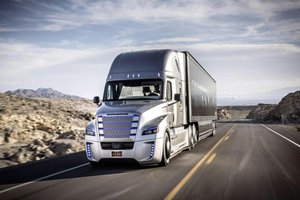 The first self-driving lorry has been licensed for commercial use - becoming the largest autonomous vehicle yet to hit the roads.

Germany's Daimler manufactured the vehicle and says the approval in the US state of Nevada is the first step towards transforming transport as we know it. The vehicle can handle long-haul motorway driving, which is the main cause of driver fatigue, but still needs a driver to take over in situations deemed too complicated for the on-board computer. Circumstances when a human might take the controls include moving in and out of distribution centres and driving through busy city streets.

While the vehicle is driving itself, Daimler says the driver is free to perform back-office tasks such as handling bookings and billing, or planning future itineraries. Daimler executive Wolfgang Bernhard said: "This is not a testing licence. This is a full operating licence. We believe that these vehicles and systems are ready, especially when it comes to security."

The company says the system must be "significantly secure and safer than any human being" to be a success. It has already undergone 10,000 miles of testing. The company said it chose the desert state because European governments had been slow to approve regulations for similar vehicles. Nevada is also one of the first US states to allow autonomous passenger cars.

It should be mentioned that Apple Inc. was aiming at a much bigger target: automobiles. The Cupertino, Calif., company has several hundred employees working secretly toward creating an Apple-branded electric vehicle. The project, code-named “Titan,” initially is working on the design of a vehicle that resembles a minivan, one of the people said.