As many as 600 million Samsung phones may be vulnerable to attacks that allow hackers to surreptitiously monitor the camera and microphone, read incoming and outgoing text messages, and install malicious apps, a security researcher said. 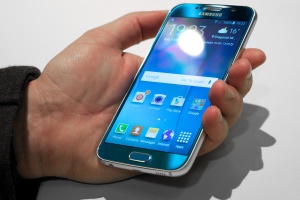 The vulnerability is in the update mechanism for a Samsung-customized version of SwiftKey, available on the Samsung Galaxy S6, S5, and several other Galaxy models.

When downloading updates, the Samsung devices don't encrypt the executable file, making it possible for attackers in a position to modify upstream traffic — such as those on the same Wi-Fi network — to replace the legitimate file with a malicious payload. The exploit was demonstrated at the Blackhat security conference in London by Ryan Welton, a researcher with security firm NowSecure. Phones that come pre-installed with the Samsung IME keyboard, as the Samsung markets its customized version of SwiftKey, periodically query an authorized server to see if updates are available for the keyboard app or any language packs that accompany it.

Attackers in a man-in-the-middle position can impersonate the server and send a response that includes a malicious payload that's injected into a language pack update. Because Samsung phones grant extraordinarily elevated privileges to the updates, the malicious payload is able to bypass protections built into Google's Android operating system that normally limit the access third-party apps have over the device.

Surprisingly, the Zip archive file sent during the keyboard update isn't protected by transport layer security encryption and is therefore susceptible to man-in-the-middle tampering. The people designing the system do require the contents of that file to match a manifest file that gets sent to the phone earlier, but that requirement provided no meaningful security. To work around that measure Welton sent the vulnerable phone a spoofed manifest file that included the SHA1 hash of the malicious payload.

Welton said the vulnerability exists regardless of what keyboard a susceptible phone is configured to use. Even when the Samsung IME keyboard isn't in use, the exploit is still possible. The attack is also possible whether or not a legitimate keyboard update is available. While SwiftKey is available as a third-party app for all Android phones, there's no immediate indication they are vulnerable, since those updates are handled through the normal Google Play update mechanism.

For the time being, there's little people with vulnerable phones can do to prevent attacks other than to avoid unsecured Wi-Fi networks. Even then, those users would be susceptible to attacks that use DNS hijacking, packet injection, or similar techniques to impersonate the update server. There is also no way to uninstall the underlying app, even when Galaxy owners use a different keyboard. In practical terms, the exploit requires patience on the part of attackers, since they must wait for the update mechanism to trigger, either when the phone starts, or during periodic intervals.

Welton said he has confirmed the vulnerability is active on the Samsung Galaxy S6 on Verizon and Sprint networks, the Galaxy S5 on T-Mobile, and the Galaxy S4 Mini on AT&T. Welton has reported to bug to Samsung, Google, and the US CERT, which designated the vulnerability CVE-2015-2865. The bug has its origins in the software developer kit provided by SwiftKey, but it also involves the way Samsung implemented it in its Galaxy series of phones.