A fake news report purportedly from Bloomberg about a possible $31 billion takeover of Twitter spurred a five percent surge in the social network's shares Tuesday before it was denied. 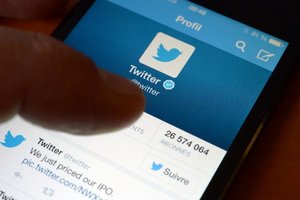 The report appeared on a "Bloomberg.market" web page virtually identical to the powerful financial news agency's real pages at "Bloomberg.com", and with links to other real Bloomberg reports.

The fake report said Twitter "is working closely with bankers after receiving an offer to be bought out for $31 billion," citing, as news agencies frequently do in such reports, "people with knowledge of the situation." The report came out at about 11:35 am and sent Twitter's shares jumping from $36.90 to $38.82 in minutes. Fifteen minutes later, though, the shares fell back to near where they started. "The story was fake and appeared on a bogus website that was not affiliated with Bloomberg," said Bloomberg spokesman Ty Trippet. The agency itself reported that the website domain had been registered several days ago by someone in Panama.

Shares in Twitter were still up 3.3 percent over Monday's close in early afternoon trade at $36.96. The shares though are sharply down from the year's peak of just over $53 in April, with investors showing concern over the company's ability to build income on its hugely popular micro-messaging platform.

Last month, the Securities and Exchange Commission charged a Bulgarian man with abusing the agency’s online database for company filings to submit the false takeover bid for Avon and for Rocky Mountain Chocolate Factory. And last year, shares in G4S, the British security services company, plunged after a fake statement claiming that the business had unearthed accounting problems. Such efforts try to force a short-term move in the stock, enough for the perpetrator to collect a tidy profit through well-timed stock purchases or sales.

The fake Bloomberg report about Twitter possessed a level of technical sophistication rarely seen in such ruses. The article page closely resembled a standard Bloomberg report, with many of the links going to real parts of the news organization’s website.