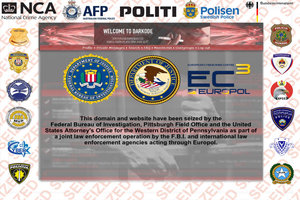 The bureau and the DOJ said Wednesday that "Operation Shrouded Horizon," a joint effort between law enforcement security agencies in nearly 20 countries, had led to the seizure and shut down of the "Darkode" online forum's domain and servers.

Seventy people involved in the forum, including its alleged administrator, have been indicted, with 12 of those indictments being handed down in the US, said the FBI and other officials. "This is a milestone in our efforts to shut down criminals' ability to buy, sell and trade malware, botnets and personally identifiable information used to steal from US citizens and individuals around the world," FBI Deputy Director Mark F. Giuliano said in a statement. US Attorney David Hickton added that "We have dismantled a cyber-hornets' nest of criminal hackers, which was believed by many, including the hackers themselves, to be impenetrable."

Online since at least 2008 and, according to Hickton, the "most sophisticated English-speaking forum for criminal computer hackers in the world," Darkode was invitation-only and password protected, with potential members being carefully vetted. But the FBI said that during a two-year undercover operation, its officers were able to infiltrate the forum "at the highest levels."

"Once in the forum, members -- in addition to buying and selling criminal cyberproducts and services -- used it to exchange ideas, knowledge and advice on any number of cyberrelated fraud schemes and other illegal activities," the FBI said in its own statement. "It was almost like a think tank for cybercriminals."

Awareness of the Internet's shadowy side has skyrocketed over the last couple of years. Perhaps most prominently, the arrest and conviction of Silk Road creator Ross Ulbricht threw a spotlight on the "Dark Web," where criminals engage in all manner of clandestine activity, exploiting tools designed to let Net users remain anonymous. Silk Road itself was a huge online marketplace for illegal drugs.

The hacking of numerous businesses and other organizations has also raised awareness and concern. The breaching by hackers of computer systems run by Home Depot, health insurer Anthem and financial services company JP Morgan, have suggested the vulnerability of financial systems and also, by extension, critical infrastructure. The CIA, in fact, recently put the online realm at the core of its mission.

The FBI characterized the effort to take down Darkode as "the largest-ever coordinated law enforcement effort directed at an online cybercriminal forum." Among those indicted, according to the DOJ, is Sweden's Johan Anders Gudmunds, the forum's alleged administrator, who's also accused of infecting more than 50,000 computers with malicious software and stealing data from those machines about 200 million times. Another person charged in the case allegedly developed and offered to sell software that could control, and steal data from, smartphones running Google's Android mobile operating system. And another person allegedly helped in an effort to infect Facebook users' computers and use them to send spam.