Uber Technologies Inc [UBER.UL] has hired two top vehicle security researchers, the company said on Friday, high-profile additions that come as the ride-hailing service ramps up its work on technology for self-driving cars. 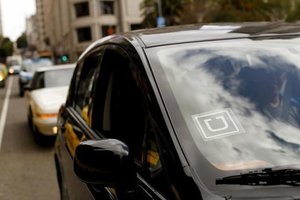 Charlie Miller, who had been working at Twitter Inc, and Chris Valasek, who worked at security firm IOActive, have resigned from their jobs and will join Uber next week. Miller and Valasek won wide attention this month after demonstrating that they could hack into a moving Jeep.

Uber said that Miller and Valasek will join the company's Advanced Technologies Center, a research laboratory Uber opened in Pittsburgh in February and staffed with dozens of autonomous vehicle experts hired away from Carnegie Mellon University. An Uber spokeswoman said Miller and Valasek will work with the company's top security officers "to continue building out a world-class safety and security program at Uber." Raffi Krikorian, who heads Uber's Advanced Technologies Center, tweeted a welcome to the duo on Friday. Miller tweeted that he was looking forward to starting his new job on Tuesday. Valasek tweeted that his last day at IOActive will be Monday.

As Uber plunges more deeply into developing or adapting self-driving cars, Miller and Valasek could help the company make that technology more secure. Uber envisions autonomous cars that could someday replace its hundreds of thousands of contract drivers. The San Francisco company has gone to top-tier universities and research centers to build up this capability.

Uber on Tuesday announced a partnership with the University of Arizona, offering the school grant money to fund research into the mapping and safety technology needed for autonomous vehicles, which Uber will test on the streets of Tucson, Arizona. This partnership follows the more tumultuous effort earlier this year at Carnegie Mellon University that resulted in Uber hiring away more than 40 of its top scientists and researchers, leaving one of the world's top robotics research institutions reeling.