What jobs are under threat from robots?

Scientists have created a huge, in-depth analysis of what jobs are under threat from robots — with salesmen, chefs and even models all in the firing line. 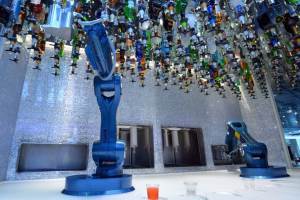 Some professions — such as therapists, personal trainers and teachers — are safe from the coming robot apocalypse. But those that require repetitive skills, the manipulation of data or manual entering of information could see their jobs taken away. The full list of probabilities is given at the end of Carl Benedikt Frey and Michael A. Osborne's report, 'The Future of Employment'. The researchers calculated all of the various advantages that humans have over machines. Jobs that reward those traits were more likely to be safe from being stolen by robots.

Those traits include creative endeavours, such as writing, entrepreneurship or scientific discovery. People in those fields might actually benefit from the robots — entrepreneurs can use technology to “leverage your invention”, the researchers point out.

Social interactions are also still highly-desired, and something robots aren’t especially good at. Humans will still be needed as managers and carers, for instance — at least for the time being, though scientists have been creating robots designed to be friends to lonely people for years.

Putting all of those characteristics together let the researchers score the likelihood of robots taking certain jobs, out of 1. The BBC has created a special tool for finding out exactly how likely a robot is to have your job — online at its Intelligent Machines website.

Robots have already taken on a good deal of jobs, the researchers point out. “Computer” used to be a word that referred to people who did data entry, for instance, and now it is the word for the little robots that sit on everyone’s desk.