A federal judge has ruled against the National Security Agency’s collection of Americans’ phone records—a victory for civil-liberties advocates—but the impact is limited because the program is due for major changes by month’s end. 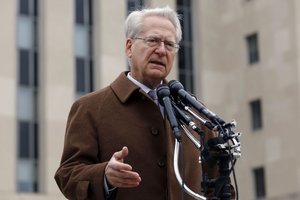 U.S. District Court Judge Richard Leon on Monday sided with conservative legal activist Larry Klayman, who had requested a court order barring the NSA from collecting the phone records of some of his clients. The clients had sued the NSA over the data collection following revelations from former NSA contractor Edward Snowden.

“This court simply cannot, and will not, allow the government to trump the Constitution merely because it suits the exigencies of the moment,’’ Judge Leon wrote in his 43-page decision. Mr. Klayman called the decision “a tremendous victory for the American people,’’ and said he plans to continue fighting the case at a trial seeking monetary damages from the government. Late Monday, the Justice Department filed an emergency request to stay the judge’s decision, saying that the technology behind the surveillance is so complex that to immediately halt collection on one individual would require them to stop all the collection.

The NSA currently collects millions of Americans phone records in order to search them for possible ties to terrorists. The records include the time, duration and number called, but not the content of the conversations. In June, Congress passed a law that will end this collection of the records. Instead the NSA will be allowed to search the phone companies’ databases for such call records, but only if it gets a warrant.

That change will take effect on Nov. 29, and government lawyers had urged Judge Leon to allow the NSA to conduct a transition to the new system on its own schedule. Judge Leon rejected that request. He noted that with the coming changes, the case may mark the last chapter in the current fight over the government’s collection of phone records. But he said the constitutional issues presented are crucial ones, and that the case wouldn’t end the debate over the government’s use of technology to conduct surveillance.

“Although this court appreciates the zealousness with which the government seeks to protect the citizens of our nation, that same government bears just as great a responsibility to protect the individual liberties of those very citizens,’’ he wrote. Judge Leon also refused to stay his order to allow time for further appeals. However, the ruling affects only some of the plaintiffs in this particular case, since they demonstrated in court that their records were being collected.

Last month, a federal appeals court in New York ruled in the opposite direction on the same issue, saying the phone records collection could continue until the program changes at the end of November. That court concluded in part that it wasn’t necessary to block the program just weeks before its congressionally mandated conclusion.