Apple's new patent wants you to control notifications with your eyes

Notifications on your iPhone might one day respond to your gaze. Apple has been granted a patent for the "delay of display event based on user gaze." 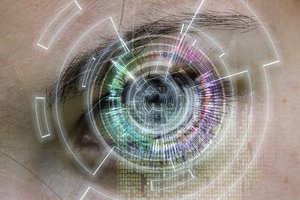 In plain English, this refers to your iPhone tracking where on the screen you're looking — and delaying notifications until your gaze is fixed in the appropriate place.

For example, you might misspell a word in iMessage. Right now, a pop-up message would appear immediately asking if you want to correct it. But if the technology described in US Patent No. 9,189,064 was implemented, your iPhone would wait until you're looking at the right place to show the notification. "In such a situation," the patent's abstract says, "it may be more intuitive to delay the execution of he display event until the gaze information indicates that the user is looking at the typed word."

As always, it's important to note that there's no guarantee that this patent will find its way into a finished product. Apple files thousands of patents that never make it into an iPhone. Some are precautionary, some are designed to entangle competitors in legislation, and some are wildly experimental. But nonetheless, they can provide an insight into the areas that Apple engineers are interested in.

Back in January 2015, it was granted a patent for a graphical user interface that would track your gaze and let you control a device through sight alone. Combined with Apple's increasingly powerful voice-controlled virtual assistant Siri, we could one day see Apple products you never need to touch.