The app around the corner

Jane Jacobs fought Robert Moses for the heart of the Village, but local businesses have suffered far more from the rise of the app economy. 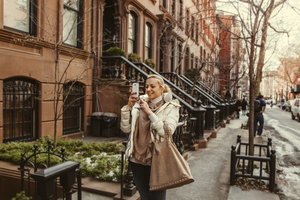 The West Village, where I grew up, has turned into many things: It’s a gallery for the rich who visit for brunch on weekends, a prop for movie sets, a stash spot for billionaires who’ve converted countless multi-family homes into McMansions in the middle of New York City, and more things to more people. Back in the ’80s, my parents bought a loft in a converted women’s prison, all the way on the far west side—with their property safe from rising rents, they’ve been able to stay.

Back then, you could find a two-bedroom apartment in the West Village renting for under $1,000 a month. Now, a two-bedroom rents for about $7,000 per month. I live in a two-bedroom apartment with roommates across the Manhattan bridge—it’s not a great neighborhood, the subway is 15 minutes away, the highway shakes my bedroom every time a truck passes. It’s not where I grew up, but it’s what I can afford.

Neighborhoods used to be valuable because of their convenience—which, in New York, is usually measured by how close they are to public transportation, their proximity to the commercial centers of Manhattan—and their amenities. There was value in the local. But now, with apps available for pretty much anything you could want, locality is losing ground to a different form of convenience, one that means you never have to leave your house, but one that also means once you’re out of your house there’s not much there. Every time I visit my parents, I notice more and more boxes stacked in the hallway stamped with the logos of on-demand delivery services; they’ve taken the place of the small businesses I frequented as a city kid in the ’90s.

The West Village was gentrifying well before apps were a thing, but technology might be the nail in its coffin: The Village, and so many other neighborhoods around the world, can function without having to work at a street level. The internet as it relates to locality is of course not totally bad. I’ve used Yelp countless times to find restaurants and shops I would have never otherwise gone to. But good or bad, the effect is the same: locality and the need for local knowledge is lost.

Rent used to keep development in check: If the rent was so high that basic services couldn’t exist, a neighborhood would become less desirable and its rents would stagnate. In the ’90s, rents in the West Village got too high for a lot of small shops, which closed. New ones opened, and these would be something equally useful but more expensive—a self-service laundromat might be replaced by a full-service dry cleaner, for example. That doesn’t happen anymore. In Williamsburg, another heavily (and quickly) gentrified New York City neighborhood, banks, Walgreens franchises, and tourist destination dining spots are replacing the bars and restaurants that were part of the initial wave of gentrification.

Apps don’t start the process, but they do enable neighborhoods to retain their real estate value without having any local value. With the dozens of apps built to disrupt local markets and quickly satisfy every need, there’s no longer a need for those former pillars of a neighborhood, grocery stores and laundromats and corner stores. Instead, we’ve got Amazon Prime Now for electronics and dry goods within an hour; Fresh Direct for groceries; Drizly for wine; Fly Cleaners for laundry; and Postmates, which hires local (underpaid) workers to get you anything else you might need. More services spring up each day.

As a result, space gets used for other things—galleries, high-end boutiques, destination restaurants—or sits empty. What might look like a vibrant neighborhood to a tourist is actually a difficult neighborhood to live in for someone like me, a middle class writer who needs things like lunch for less than $10, paper towels from the deli, and a cheap place to do my laundry.

Today, there are few stores and restaurants I can afford to patronize in the West Village. When I dog-sit at my parents’ house it’s rare for me to shop locally; I’m forced to rely on the same apps I lament to bring me what I need. When I do that I’m participating in the system that undermined what made the Village great—its community, the chance interactions you had with neighbors on the street, the ability of people to run small-businesses there that were net benefits to the people who live there.

Taken to its logical conclusion, this cycle—gentrification, rising rents, local businesses dying and being replaced by their app-mediated equivalents—kills neighborhoods. Some places have lost almost all function except as tourist destinations. Many flagship stores in SoHo, the trendy Manhattan neighborhood historically home to artists and galleries, for example, pay tens of thousands of dollars a month in rent and don’t care much about making a profit. Now, the neighborhood functions as a showcase for luxury brands. That’s started to creep into the West Village too. On Bleecker Street, just a few blocks from where I grew up, Marc Jacobs owns six stores that are essentially display cases for each of his collections. They’ve replaced a bookstore, some independent clothing stores, and a cheap antique store owned by a friendly guy who would give me small gems when I was a kid. (I was very into gems.)

This a sad fate for the Village; Jane Jacobs wrote her treatise on urbanism, The Death and Life of Great American Cities, from a townhouse a couple blocks away from where I grew up. She believed all neighborhoods should emulate the Village’s small shops, varied street lengths, and focus on its community. But even back in the ’60s, Jacobs saw how the neighborhood institutions that the poor and middle class relied on were being usurped for the benefit of the rich.

“The well-off have many ways of assuaging needs for which poorer people may depend may depend much on sidewalk life,” she wrote. “But nevertheless, many of the rich or near-rich in cities appear to appreciate sidewalk life as much as anybody. At any rate, they pay enormous rents to move into areas with an exuberant and varied sidewalk life. They actually crowd out the middle class and the poor in lively areas like Yorkville or Greenwich Village in New York, or Telegraph Hill in San Francisco.” Jacobs went on to warn that the “outstanding success” of a neighborhood like the Village has a tendency to be ruined by the wealthy. Fifty years later, her predictions have come true.

In every gentrified city there now exists a dead zone, caused by rents so high that stores selling the things normal people need can’t survive. The lawyer and writer Tim Wu called the phenomenon “high rent blight,” and explained how it works in The New Yorker. “If you’re a landlord, why would you keep renting to a local café or restaurant at five thousand or ten thousand dollars a month when you might get twenty thousand or even forty thousand dollars a month from Chase?” For landlords, the calculation is that simple.

And it’s not just New York. In San Francisco, the Mission’s new condos are having a hard time filling their storefronts; in London shops are closing all over the place as the city experiences its own gentrification crisis, precipitated by a huge deregulation of the housing market and a boom-time economy. In L.A., newly built mixed-use neighborhoods are already retail ghost towns, even as the apartments above them command sky-high rents.

There are, of course, potential policy solutions. New York regulates hundreds of thousands of apartments to help reduce citywide rents, offers incentives to developers to include affordable housing in new buildings, and has several programs encouraging middle class homeownership. But nothing like that exists for commercial storefronts, probably because of the market-friendliness of local politicians. “These things are treated as if they’re entirely private market decisions,” said Scott Bernstein, the president of the Center for Neighborhood Technology, an urban planning think tank. “There are all sorts of programs for subsidizing housing but there’s not one for stores.”

Tech, for its part, isn’t helping the situation. Uber has been insensitive when it comes to labor issues, presenting its drivers as happy independent contractors with flexible schedules as opposed to people who would rather have full-time employment but can only find sporadic work; Airbnb is spending millions in cities like San Francisco to convince people to vote against regulation that protects low-income neighborhoods from having too many apartments usurped by Airbnb-ers.

In other words: Apps that replace stores have presented themselves as unquestionable goods, necessary disruptors of an outdated system. Jordan Metzner, the founder of laundry delivery app Washio told New York magazine last year that he and his business partners were out to not only provide convenience, but to “demolish laundry.”

Talk of disruption and convenience obfuscates what’s actually happening: It’s more convenient than ever for those who understand technology and can afford the higher prices of delivered laundry and food; life is less convenient for everyone who’s not quite so fortunate. Not only are local laundromats, delis, and the like cheaper than the equivalent apps, but they also function as community spaces where chance interactions occur. Urban planners call them “third places,” which differentiates them from the “first” and “second” places of home and work—Jane Jacobs herself thought them crucial to the functioning of the ideal city.

People appear to be searching for the sense of community provided by these third places even as they close all over: Indie bookstores, coffee shops, bars, and restaurants are thriving in New York and other gentrifying cities, as people try to replicate what once made neighborhoods great. But there’s a difference between a laundromat and a $10 cocktail bar or destination restaurant, because the latter aren’t the same kinds of spaces non-gentrifying residents of New York and other cities need.

My grandma wouldn’t sip a Manhattan at an overpriced West Village cocktail bar. There is a group of people the market favors and rewards, and those people are not my grandmother. While laundry, food, wine and everything else are now available with a few taps, everyone else learns to live with less.