Former Central Intelligence Agency (CIA) analyst Edward Snowden, known for revealing the extent of surveillance by US intelligence, has said that this form of surveillance is "more aggressive and invasive today than it was before". 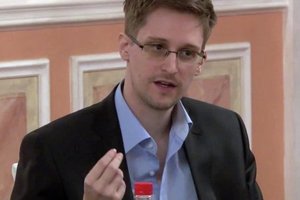 Snowden made the statement in Moscow, where he has been granted asylum after being accused of espionage in 2013 for revealing secret surveillance programmes of the US government.

Snowden said that not only the US has used these methods of mass surveillance, but also the Spanish, French, German and British governments because "it is cheap, easy and useful", experts reported. According to Snowden, terrorism has been used to provide a justification for the use of this mass surveillance. "It was diplomatic manipulation, economic spying and social control. It was about power, and there is no doubt that mass surveillance increases the power of the government," he said.

He recalled that the result of an investigation ordered by US President Barack Obama on this type of surveillance found that it had not been effective in the fight against terrorism. When asked about the possibility of returning to his country, Snowden said that he tried to reach an agreement by requesting a fair trial but the government responded with a letter promising not to torture him.

Snowden said he doubted that the Spanish government and the Spanish intelligence services (CNI) did not know about or were not involved in the mass surveillance, which he believes took place in Spain. According to Snowden, every time any one of the approximately 45 million people who live in Spain sends a text message, makes a call or visits a website, a record is created. Every time a purchase is made using a bank card, a log is generated, Snowden.

OUR POINT
Intelligence agencies become more and more aggressive. Governments are looking for ways to read every chat and listen to every phone conversation. Of course, the whole activity is justified by the fight against terrorism to protect mankind.

The recent trend is as follows: curious people do not particularly hide their activity. Correspondingly, “heaven helps those who help themselves” approach is of current interest. Protect your communication from prying eyes and ears: download SafeUM messenger.
Tags:
Snowden surveillance
Source:
Business Standard
2049
Other NEWS
3 Jul 2020