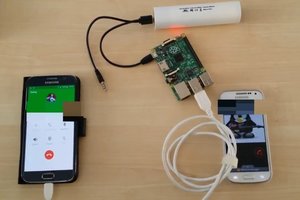 According to a technical write-up published on GitHub two days ago, an attacker that has temporary access or has stolen a Samsung Galaxy device, can connect it via USB to a Linux workstation and send malicious commands that initiate hidden calls and send SMS messages.

This trick works without leveraging any software vulnerability, and even if the phone has USB debugging (ADB - Android Debug Bridge) or USB tethering turned off. The problem at the core of this issue is the fact that whenever the phone is connected via USB to another Linux system, the device automatically exposes a USB-serial modem, accessible using the corresponding Linux device, in most cases via the "/dev/ttyACM0" path.

Running simple AT (Attention) commands via this interface lets a skilled attacker initiate various operations. More details on the Hayes AT commands (modem-specific terminal commands) can be found on tech site EngineersGarage. During their experiments, researchers managed to run the exploit against Samsung Galaxy models such as S4 Mini, S4, S6 and (Galaxy) Note 3 (full list with firmware versions at the end of the article).

"Exploit is trivial on older devices"

The attack is not universal since the researchers didn't manage to exploit any Samsung Galaxy device they've picked up, saying that "Samsung probably became aware of the risks related to such commands and introduced a blacklist-based mechanism to filter out dangerous ones [AT commands]."

Based on the device they've tested and the firmware they analyzed, the two researchers said the exploit is trivial on older models. Newer devices are also vulnerable, but the exploit code needs modifications to bypass some newer security measures added in Android and Samsung firmware.

Below are two videos. The first is a proof of concept for the vulnerability, which was revealed last December, and the second is another vulnerability altogether, on which the researchers remained silent (for now). The article was updated to simplify and clarify the exploit procedure's wording.