Cards with chips are still vulnerable

The banking industry spends a lot of effort, time, and money to protect bank cards. For years, their protection consisted of embossed digits and a signature field, but now smart chips and one-time passwords stand guard between your money and the criminals who want it. 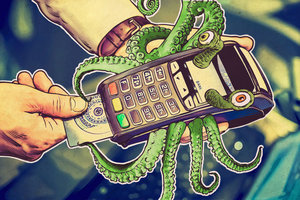 The new chip and PIN cards (an EMV standard) promised greater security than simple magnetic stripe cards, but no sooner were they deployed than criminals tried to break their protection. Fortunately, criminals are not the only ones testing them; security experts also investigate the systems.

Company researchers probe for vulnerabilities in the equipment and architecture of payment systems, trying to find them and warn developers so that they can patch holes before criminals find a way in. The researchers’ Black Hat presentation offered cause for both hope and anxiety: Yes, criminals can steal money from chip cards — but people are not helpless to protect themselves.

Two employees of NCR Corp., a company that develops payment terminals and ATMs, presented an attack at payment terminals commonly used in stores and gas stations. Using small and cheap Raspberry Pi computer, they inserted themselves into the communication between the store’s main computer (roughly speaking, the cash register) and the payment module (roughly speaking, the PIN pad).

In general, communication between these two systems has to be properly encrypted, but in many cases, the terminal is set up to use weak encryption. As a result, criminals can carry out man-in-the-middle attacks: They intercept communication data between the payment module and the main computer and decrypt it. The attack doesn’t actually pull data though the basic security of a chip card; certain data, such as the PIN code, is encrypted on the chip and never transmitted openly. However, the attacker can obtain other information from the chip — data typically written on the magnetic stripe.

In this way, criminals can find out the owner’s name and card number and use that data to make online payments with the help of the victim’s card. Of course, in that case, the criminals also need the CVV2 or CVC2 code from the back of the card — that is usually kept secret during data transmission. But criminals can try to trick cardholders into giving up the information. In addition to standard requests like “Insert Card” and “Enter PIN,” payment terminals can show a number of other notifications — a new request, for example, such as “Enter your CVV2 (or CVC2).”

Here’s another interesting approach: A criminal can add something like “Error, enter PIN again” — but this time the terminal would think that it is asking for open, not secure, information. If this trick works, the terminal sends secure data as insecure and criminals obtain victims’ PINs.

Researchers have two simple tips for cardholders who want to stay safe. First, you should never enter your PIN twice in a transaction. If you see an error and get a request to enter your PIN again, cancel the transaction, take out the card, insert it again, and enter your PIN once more (and only once). You should also be vigilant and ignore any unusual questions asked by the payment terminal — especially if it is “What is your CVC2/CVV2?”

The second tip is not applicable in all countries, but it’s interesting. NCR experts have a high opinion of mobile payment systems security (like Apple Pay), so paying with your watch or phone might be more secure than using the credit card. Of course, using good old cash is the best protection of all against banking and credit card frauds.