The Facebook-owned WhatsApp will give its users’ personal information to its parent company and plans to make it easier for businesses to contact subscribers. 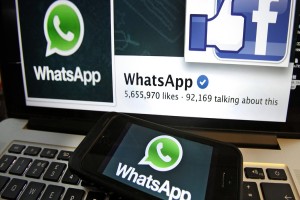 “By coordinating more with Facebook, we'll be able to do things like track basic metrics about how often people use our services and better fight spam on WhatsApp. And by connecting your phone number with Facebook's systems, Facebook can offer better friend suggestions and show you more relevant ads if you have an account with them,” said the California-based company. In practice, the benefits are less likely to be for WhatsApp, and more for data-hungry Facebook, which will know even more about its members.

"When WhatsApp was acquired by Facebook it was able to reassure users that it would remain independent," Pamela Clark-Dickson, analyst at tech consultancy firm Ovum, told. "Now it's giving Facebook phone numbers - some might say that's a betrayal of trust. In a small way, it has gone back on what it said it wouldn't do."

WhatsApp, founded in 2007, before being bought out for $19 billion two years ago, also wants to make itself the hub of all of its users’ outside communication – not just messaging and sending files – virtually replacing all functions provided by phone companies and their SMS services. “We want to explore ways for you to communicate with businesses that matter to you too, while still giving you an experience without third-party banner ads and spam,” says WhatsApp, which does not charge its users anything to download or use the app.

“Whether it's hearing from your bank about a potentially fraudulent transaction, or getting notified by an airline about a delayed flight, many of us get this information elsewhere, including in text messages and phone calls. We want to test these features in the next several months, but need to update our terms and privacy policy to do so.”

It is expected that businesses will pay the company – which had relatively small revenues of $10.2 million the year before it was acquired – for the privilege of being able to contact its users directly, in accordance with plans announced earlier this year. The Ukrainian-American co-founder of WhatsApp, Jan Koum, once wrote that “respect for your privacy is coded into our DNA.” The company also boasts about its recently introduced end-to-end encryption, and the fact that it “won’t post or share your WhatsApp number with others, including on Facebook, and still won't sell, share, or give your phone number to advertisers.”

“Our belief in the value of private communications is unshakeable, and we remain committed to giving you the fastest, simplest, and most reliable experience,” says the company. If users are not convinced, they can switch to other similar applications, such as the privacy-conscious Telegram, but the fact that WhatsApp is already installed on so many smartphones gives it an entrenched advantage. And although the statement from WhatsApp does not mention it, it is possible to opt out of the new Facebook data sharing when accepting the new privacy terms, although this will not entirely stop the company from exporting its subscribers’ data.

They say “there's always free cheese in the mouse traps” so often, as it depicts the reality. When one company buys another one for millions of dollars it means that big bosses and strategic thinkers realized how they can earn more.

So, we applaud to Zuckerberg’s team for building a chain of communications with the market:
1) first WhatsApp claims about P2P chat encryption and only then they claim that
2) WhatsApp will share users’ phone numbers with Facebook. Does anyone have the slightest doubts that it’s all done for the users’ convenience only?
One just can only guess how my phone number sharing between the apps might help me and make my life better.
There’s something to think about… What Facebook and WhatsApp can do together in future? Will they offer me to add a marketer to my contact list because we’ve been on that very concert together?
Or maybe I'll get a notification from Facebook about shocker sale as on Fridays I usually pass through the district where crime rates are rising for the fifth week?
Or will be an offer to sell a kidney because I exceeded the speed limits three times this month and now a kidney is at favorable price?
Time will show how deep octopus continues spreading its tentacles.
And it will. There's always free cheese, you know…