Another round of hacked Democratic National Committee documents have been released. Provided by an anonymous representative of a hacker, Guccifer, the 500 megabytes detail the DNC’s information technology infrastructure and internal reports on donors. 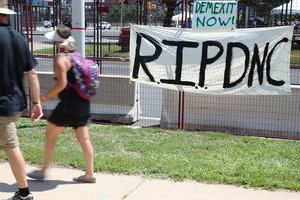 On Tuesday in London at the Future of Cyber Security Europe conference, Guccifer addressed cybersecurity experts through an unknown and remote transcriber.

The notorious hacker then shared a trove of documents ostensibly obtained via a breach of the DNC’s cybersecurity. A password and login was given to them, and the documents they accessed appeared to show details of DNC donors and finances as well as the information technology setup to protect the sensitive data. A document titled “11-26-08 NFC Members Raised” lists more than 450 fundraising individuals who helped bring in millions of dollars for three organizations – Obama for America (OFA), the Democratic National Committee (DNC), and CFC, which is assumed to be the Combined Federal Campaign.

Among the names listed are those who rose to official prominence after working on Obama’s campaigns. For example, the current US ambassador to the United Kingdom, Matthew Barzun, raised $1,174,430 for OFA, $1,907,100 for the DNC, and $421,550 for the CFC, for a total of $3,503,080. Barzun also helped raise $700 million to fund President Obama’s 2012 re-election campaign. More than $2.3 million of this was raised personally by Barzun, according to party records leaked.

In July, just as the Democratic National Convention was getting underway, WikiLeaks released the results of the first DNC hack carried out by Guccifer. That hack revealed signs of bias in favor of Hillary Clinton over her primary opponent Bernie Sanders, and consequently led to the resignation of the DNC chair, Debbie Wasserman Schultz, as well as several other top officers.

The DNC responded to the latest hack claim Tuesday through its Interim Chair Donna Brazile, who stated that the "DNC is the victim of a crime," which she blamed on "Russian state-sponsored agents," while also cautioning that the hacked documents were still being authenticated by the DNC legal team, as "it is common for Russian hackers to forge documents."

The documents appear to cover the DNC from 2009 to 2011, during which time current Democratic vice presidential nominee Tim Kaine was chairman of the DNC. One document, called “Contact List - Complete List,” included cell phone numbers of Kaine himself, as well as Valerie Jarrett, who currently serves as Senior Advisor to the President of the United States and Assistant to the President for Public Engagement and Intergovernmental Affairs, along with former Obama advisers Rahm Emmanuel and Daniel Pfeiffer.