US spies think China wants to read your e-mail

For more than a decade, the U.S. military and intelligence community has quietly warned that the world's largest telecom equipment manufacturer, Huawei, is an arm of the People's Liberation Army and that its phones, circuits and routers are instruments of Chinese eavesdropping. 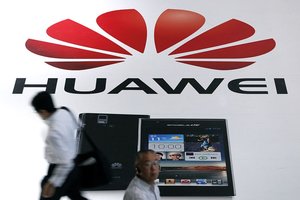 Now these agencies are starting a formal review, led by the FBI and the NSA, examining the national security implications of Huawei's potential participation in building the U.S. 5G wireless network, according to current and former U.S. intelligence officials.

These officials told me that while the two largest U.S. telecom providers -- AT&T and Verizon -- have yet to join up with Huawei on this project, the prospect of such a partnership is real and alarming. They spoke on condition of anonymity because the intelligence assessment was ongoing and classified. Last month AT&T announced it had begun preliminary talks with a host of companies, including Huawei, to create global standards for the 5G network.

An AT&T spokesman, Fletcher Cook, told me last week, "The companies mentioned in that announcement are those we’re working with on standards, not a list of our 5G equipment suppliers." He added that Huawei had not been announced as a vendor for the U.S. 5G network, but declined to comment whether the company might be chosen in the future.

Huawei itself is eager to compete for 5G contracts in the U.S., according to William Plummer, the vice president for external affairs of Huawei USA. "We believe that it is a good thing for governments and industry to engage in future network planning," he told me. "It would seem natural that such planning would include consideration of the world’s leading provider of proven and trusted 4G/LTE networks and one of the recognized global leaders in the development of next-generation 5G networks."

One problem, according to U.S. intelligence officials and other experts, is that Huawei has advantages its competitors do not. It has a $100 billion line of credit from Chinese state-owned banks that it can extend to its customers, according to a 2012 report from the House Permanent Select Committee on Intelligence. This lets Huawei underbid other companies such as Cisco and Ericsson.

Huawei disputes this. The House report says, "Huawei explained at the February 23, 2012, meeting with Committee investigators that the goal of the large available credit lines was for China 'to appear impressive' and that 'Huawei had to participate or would no longer receive loans' from Chinese banks." Huawei representatives said that between 2005 and 2011, only $5.9 billion was been drawn from this line of credit.

The bigger concern for the U.S. intelligence community has been the prospect that Huawei's closeness to the Chinese government makes it an intelligence asset, similar to how U.S. telecom providers such as AT&T have given the NSA access to data on their networks, as documents disclosed through former contractor Edward Snowden have shown.

Through Huawei, China could gain this kind of access by implanting microscopic beacons inside its routers and circuits allowing the People's Liberation Army to peer into U.S. communications networks. One former U.S. intelligence operator told me these beacons were first detected by the U.S. military in 2004. "We freaked out because we knew these routers would phone home to China," this source said.

"The federal government has long been concerned about Huawei's apparent efforts to obtain access to key U.S. and allied telecommunications infrastructure," Jamil N. Jaffer, a former counsel to the assistant attorney general for national security, told me. He pointed to the 2012 House Intelligence Committee report as well, which says Huawei and another Chinese firm, ZTE, "cannot be trusted to be free of foreign state influence and thus pose a security threat to the United States and to our systems."

At the time, Huawei circulated a lengthy rebuttal to that report, insisting that the company had no ties to the Chinese military and did not allow the Chinese state in any way to interfere with its equipment to monitor customer communications. Charles Ding, Huawei's corporate vice president, told the committee that modifying its equipment in such a way would be "corporate suicide."

Some Western countries think it's possible to overcome the espionage risk. Last year an independent audit conducted by a team of U.K. cybersecurity experts found no evidence that Huawei gear posed a threat to the country's national security. A U.K. government review in 2013 also concluded the dangers were not sufficient to block Huawei's participation in the country's broadband network, and that British Telecom had taken sufficient steps to mitigate any such threat.

Other U.S. allies, however, have been more wary. Australia in 2013 upheld a ban on allowing Huawei to be a vendor for its national broadband network. Andrew Shearer, who was national security adviser at the time to Prime Minister Tony Abbott and is now a scholar at the Center for Strategic and International Studies, told me it's a matter of public record that Australian agencies had concerns about the threat Huawei equipment could pose in the country's network, and routinely compared notes with their U.S. and U.K. counterparts.

"Our partners also had serious reservations about Huawei," Shearer said. "The concern is China's ability to insert trap doors into critical telecommunications infrastructure, giving Beijing potential access to our national communications." U.S. intelligence officials are now reviewing whether those trap doors will end up in U.S. cell phone towers if Huawei cuts a deal with companies such as AT&T and Verizon to build the country's next-generation wireless network.