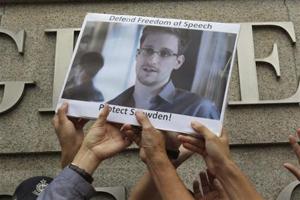 “Sources briefed on the matter” told Reuters that such a cache could be used as an insurance policy in the event Snowden was captured, and that, “the worst was yet to come.” The officials cited no hard evidence of such a cache, but indicated it was a possible worst-case-scenario. Some version of that scenario appears to have come true.

“It’s only accessible for a few hours a day, and is triple encrypted to the point where no one can break it,” the official said of the data cloud where Snowden has likely hidden the information. According to the official, there are at least two others in possession of the code to access the information, and, “if we nail him — he’ll release the data.” “Everything you don’t want the enemy to know, he has,” the official said. “Who we’re listening to, what we’re after — they’d shut us down.”

The damage would be “of biblical proportions,” the official said. Another official from the NSA task force commissioned to assess the data stolen and leaked by Snowden said on television recently that granting Snowden amnesty is “worth having a conversation about” in order to secure any potential stolen data.

Director of the NSA Gen. Keith Alexander said on “60 Minutes” Sunday that he opposes the idea, and said that people need to be held accountable for their actions. The White House stated Monday it would not be changing its policy regarding Snowden. The NSA director has repeatedly testified before Congress about the revealed programs, and continues to state that the leaks have compromised U.S. national security.

Alexander announced in October he would be retiring as NSA director and head of U.S. Cyber Command effective March, and a recent White House task force charged with improving NSA transparency has suggested appointing a civilian head to steer the signals intelligence agency. The official said that following Alexander’s retirement, he doesn’t “know how (the amnesty conversation) is going to play out.”