Seven years later, Shazam is still an amazing idea -- just press a button to know the name of the song that's currently playing. That's all well and good, but what if the music discovery tool keeps on listening, even when you turn it off? 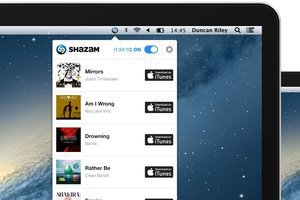 On Monday, benevolent hacker Patrick Wardle revealed that -- on Mac computers -- the Shazam app never lets go of your laptop or desktop microphone. It continues to listen even after after you've told the app to stop listening.

Don't get outraged just yet, though. It doesn't look like Shazam is doing anything malicious with that data: not saving it, processing it, or phoning it back home to servers. It's simply on when it should be off. But it's also not a bug: Shazam told it's intentional, so that users don't have to wait several seconds for music to buffer before getting the name of a song. That excuse doesn't really pass the smell test, so we spoke to Shazam's Chief Product Officer Fabio Santini to understand the situation a little more. He explained that it was just a choice the company made in the Mac version -- and only the Mac version -- since the whole automatically-running-in-the-background thing is what the company promised on Mac since day one.

Santini told us that even if a hacker could get hold of that data, it still wouldn't let them eavesdrop on your personal conversations: Shazam just samples a few points along the audio wave to create a digital "fingerprint" that it matches against other "fingerprints" in the company's music database. "Those points can't be reverse-engineered to reconstruct original audio," he tells us.

Still, Shazam has a target on its back now that the always-recording feature has been revealed -- what if hackers could figure out how to take advantage of the fact that the microphone stays on? This may all be a moot point, though, because the publicity has convinced Shazam to change how its Mac app works. "We want to be sensitive to what our users think and feel," says Santini.

"Even though we don't recognize a meaningful risk, we want to make this configuration change to show that we care, and we pay attention, and we want them to feel good about using Shazam on their Mac." Santini says the company should be updating its Mac app within the next few days.