Several users of Apple devices in Australia have reported that their gadgets have been "hijacked" - with a message demanding money. Experts believed the hack had targeted users by exploiting the Find my iPhone feature. 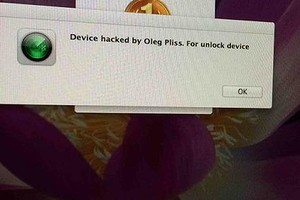 A message appeared on some targeted phones asking for "$100 USD/EUR" to be sent to a PayPal account. Networks advised affected users to contact Apple, which denied its cloud storage service had been breached.

"Apple takes security very seriously and iCloud was not compromised during this incident. Impacted users should change their Apple ID password as soon as possible and avoid using the same user name and password for multiple services," the firm said.

"Any users who need additional help can contact AppleCare or visit their local Apple Retail Store." PayPal has said any funds sent to the specified account would be refunded.

According to the Sydney Morning Herald, the problem spread across much of Australia, with reports of attacks in Queensland, New South Wales, Western Australia, South Australia and Victoria.

However, reports have emerged from further afield, with at least one case said to have occurred in London. It involved an Australian visiting on holiday. Concerned users took to Apple's support forums, and Twitter, to share details of attacks, which affected iPhones, iPads and, in some cases, Mac laptops.

"This has happened to me too in Brisbane, woke me up half an hour ago," wrote one user, amberoonie. "Freaking out as when I opened my laptop it had the same message 'Device hacked by Oleg Pliss. For unlock device' with the Find My iPhone icon." It is unlikely the hacker would use his real name in the message.

Information security consultant Brian Honan told the BBC that so far little is known about the source of the attacks. He said theories ranged from someone having access to Apple's systems, to hackers having access to a database of usernames and passwords - perhaps obtained from a third party.

Regardless, he said Apple had to move quickly to reassure users. "One of the key things, as in any security breach, is being able to communicate proactively with your affected customers," he said. "Even just to let them know what you're doing to deal with the issue can be reassuring."

OUR POINT
As we can see users' personal devices are becoming more and more attractive for criminals. So besides losing control over the device which may result in remote malware setup the user’s personal information is likely to leak as well. Personal data may be stolen and transmitted to third parties, including the criminals.
Tags:
hackers Australia surveillance Apple
Source:
BBC
2011
Other NEWS
3 Jul 2020