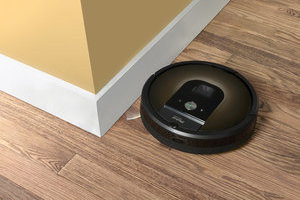 This helps them avoid crashing into your couch, but it also creates a map of your home that iRobot is considering selling to Amazon, Apple or Google. Colin Angle, chief executive of iRobot, told that a deal could come in the next two years, though iRobot said in a statement on Tuesday: “We have not formed any plans to sell data.”

In the hands of a company like Amazon, Apple or Google, that data could fuel new “smart” home products. “When we think about ‘what is supposed to happen’ when I enter a room, everything depends on the room at a foundational level knowing what is in it,” an iRobot spokesman said in a written response to questions. “In order to ‘do the right thing’ when you say ‘turn on the lights,’ the room must know what lights it has to turn on. Same thing for music, TV, heat, blinds, the stove, coffee machines, fans, gaming consoles, smart picture frames or robot pets.”

But the data, if sold, could also be a windfall for marketers, and the implications are easy to imagine. No armchair in your living room? You might see ads for armchairs next time you open Facebook. Did your Roomba detect signs of a baby? Advertisers might target you accordingly.

Jamie Lee Williams, a staff lawyer at the Electronic Frontier Foundation, a digital rights group, said information about the size of a home and the amount of furniture in it could allow advertisers to deduce the owner’s income level. Eventually, it might even be possible to identify the brands the owner uses.

“Especially combined with other data, this is going to be able to reveal a ton of information about what people’s lifestyles are like, what people’s daily patterns are like,” Ms. Williams said. Albert Gidari, director of privacy at the Stanford Center for Internet and Society, said that if iRobot did sell the data, it would raise a variety of legal questions.

What happens if a Roomba user consents to the data collection and later sells his or her home — especially furnished — and now the buyers of the data have a map of a home that belongs to someone who didn’t consent, Mr. Gidari asked. How long is the data kept? If the house burns down, can the insurance company obtain the data and use it to identify possible causes? Can the police use it after a robbery? Some who reacted online on Monday and Tuesday were alarmed.

“Your friendly little Roomba could soon become a creepy little spy that sells maps of your house to advertisers,” tweeted OpenMedia, a Canadian nonprofit. “Just remember that the Roomba knows what room your child is in,” Rhett Jones wrote. “It’s the one where it bumps into all the toys on the floor.” In its written response, iRobot said that it was “committed to the absolute privacy of our customer-related data.” Consumers can use a Roomba without connecting it to the internet, or “opt out of sending map data to the cloud through a switch in the mobile app.”

“No data is sold to third parties,” the statement added. “No data will be shared with third parties without the informed consent of our customers.” “Informed consent,” of course, can be a vaguely defined term; Ms. Williams and Mr. Gidari noted that it might simply involve a privacy policy that few consumers read. But this criticism is “really applicable across the board to everybody’s privacy policy,” Mr. Gidari said. “It’s really tough to criticize one without criticizing all.”

But in the long term, what iRobot does with individual users’ data may not be the most important question. The third-party collection and dissemination of information about the inside of homes could have implications for the privacy laws that constrain the government and law enforcement. The Supreme Court has held that Americans have “a reasonable expectation of privacy in your home,” Mr. Gidari said. “Once your home is turned inside out, does that reasonable expectation of privacy dissipate?”