Got a robot hoover buzzing around your home? It's time to take a look at its security, especially if its an LG device. 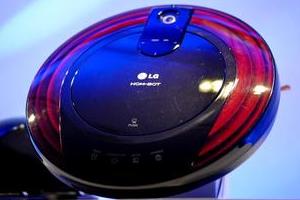 Researchers from Israeli firm Check Point reported a hack of the LG SmartThinQ app that allowed them to remotely take control of the manufacturer's Hom-Bot hoover and use the video feed to spy on anything in the device's vicinity.

And, the researchers said, the attack could also compromise refrigerators, ovens, dishwashers, washing machines, dryers and air conditioners -- any connected thing controlled by the LG app. Users should update to the latest version of the app through Google Play, the Apple App Store or the LG SmartThinQ settings, if they haven't done so already. That will prevent the attacks, which were first disclosed to LG on July 31, before being fixed in a SmartThinQ release this September.

But the hack goes to show just how an entire home can be exposed to hackers with a simple weakness in a mobile application. The Check Point researchers showed just how the Hom-Bot, reportedly owned by more than one million users, could be forced to relay a video feed to hackers sitting in front of a PC.

Hack only needs an email address

The vulnerability lay in how the SmartThinQ app processed logins and only required the hacker with moderate skill to know the email address of the target. To understand what went wrong, a quick primer on how the app handled authentication is required. First, the user would enter their login details, which would be validated by a backend server. Second, a signature would be created based on the provided username (i.e. the email address). Third, an access token would be generated, combining information from the signature and the username. That token allowed access to the account.

But there was no dependency between the first steps and the subsequent two, according to Check Point. An attacker could first use their username to pass step one, but then, if able to intercept traffic, switch the victim's username in for steps two and three. This would effectively grant them access to the target account.

Recently, researchers from IOActive showed how home assistant robots could be hacked to turn violent, whilst experts revealed numerous privacy and safety issues with home alarm and security systems last year. If it wasn't already clear, smart homes can, with little effort, be turned into spy homes.