Advertising on Snapchat is impossible to turn off

Snapchat reportedly has more than 100 million active users of its free photo and video messaging app, but it has never made any money from them. Now it’s hoping to change that by running adverts within the app. 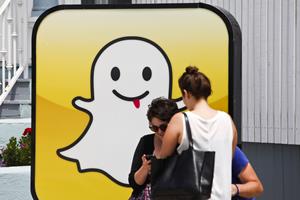 The first one appeared inside the app’s Recent Updates screen for American users over the weekend: a 20-second trailer for horror film Ouija, paid for by studio Universal Pictures.

“It’s the first time we’ve done anything like this because it’s the first time we’ve been paid to put content in that space. It’s going to feel a little weird at first, but we’re taking the plunge,” explained Snapchat in a blog post published before the ad launched. The subject matter may have been scary, but Snapchat was at pains to tell its users that it wants to steer away from “creepy” ad-targeting, as well as avoiding being too intrusive with advertising.

“The best advertisements tell you more about stuff that actually interests you. Some companies spend a lot of time and collect a lot of data about you to figure that out. The product we’re releasing today is a lot simpler. An advertisement will appear in your Recent Updates from time to time, and you can choose if you want to watch it. No biggie. It goes away after you view it or within 24 hours, just like Stories.

We won’t put advertisements in your personal communication – things like Snaps or Chats. That would be totally rude. We want to see if we can deliver an experience that’s fun and informative, the way ads used to be, before they got creepy and targeted. It’s nice when all of the brilliant creative minds out there get our attention with terrific content.”

Neither Snapchat nor Universal said how much the latter is paying for the ad, although Universal’s executive vice president of marketing Doug Neil told AdAge why the studio was keen to advertise within Snapchat. “We like to select media platforms that are appropriate for our audience. We’ve been closely following Snapchat and its adoption. It seems to be right in the core of our target audience for the movie Ouija,” he said.

“I think Snapchat has been talking to all the studios and entertainment companies and brands for a long time. They just haven’t had opportunities previously. We’ve been having conversations with them for a while and just waiting for when would be the right opportunity.” In December 2013, Snapchat poached Emily White, the executive responsible for bringing adverts to Instagram, to become its chief operating officer.

Neil added that Snapchat had specifically requested a video ad, and said that Sony had edited the trailer to fit in with the app by “using small video bursts the way a Snapchat Story would have been created”. Snapchat has been growing fast in the last couple of years, with the Wall Street Journal reporting in August that Snapchat had more than 100m monthly active users, with around two thirds of them using it every day.

The company was valued at $10bn in its last funding round, despite its lack of revenues. It famously turned down a $3bn acquisition offer from Facebook in 2013 in favour of remaining independent. Snapchat’s appeal to internet giant and brands alike is its popularity among teenagers and twentysomethings. In August, research firm comScore claimed that 32.9% of 18-34 year-olds in the US were using the app, but this was closer to 50% for 18-24 year-olds.

Snapchat has sparked several controversies as it has grown, however. In September, it settled a long-running lawsuit from co-founder Reggie Brown, who had alleged he had been squeezed out of the company without appropriate credit or compensation by chief executive Evan Spiegel and chief technology officer Bobby Murphy.

More recently, a hack dubbed “The Snappening” saw tens of thousands of private Snapchat photos leaked, although the company said that the fault lay with an unsupported third-party service, SnapSaved, that promised to allow users to save pictures sent to them using Snapchat.