Wider tracking of Mail in the USA

Its own internal inspection unit to secretly monitor the mail of Americans for use in criminal and national security investigations.

The number of requests, contained in a 2014 audit of the surveillance program by the Postal Service’s inspector general, shows that the surveillance program is more extensive than previously disclosed and that oversight protecting Americans from potential abuses is lax. The audit, along with interviews and documents obtained under the Freedom of Information Act, offers one of the first detailed looks at the scope of the program, which has played an important role in the nation’s vast surveillance effort since the terrorist attacks of Sept. 11, 2001.

The audit, which was reported on earlier by Politico, found that in many cases the Postal Service approved requests to monitor an individual’s mail without adequately describing the reason or having proper written authorization. In addition to raising privacy concerns, the audit questioned the efficiency and accuracy of the Postal Service in handling the requests. Many requests were not processed in time, the audit said, and computer errors caused the same tracking number to be assigned to different surveillance requests.

“Insufficient controls could hinder the Postal Inspection Service’s ability to conduct effective investigations, lead to public concerns over privacy of mail and harm the Postal Service’s brand,” the audit concluded. The audit was posted in May without public announcement on the website of the Postal Service inspector general and got almost no attention.

The surveillance program, officially called mail covers, is more than a century old, but is still considered a powerful investigative tool. At the request of state or federal law enforcement agencies or the Postal Inspection Service, postal workers record names, return addresses and any other information from the outside of letters and packages before they are delivered to a person’s home. 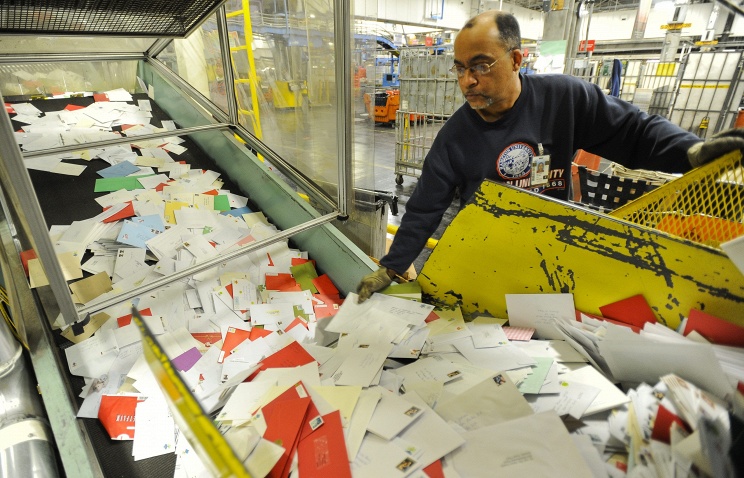 Law enforcement officials say this deceptively old-fashioned method of collecting data provides a wealth of information about the businesses and associates of their targets, and can lead to bank and property records and even accomplices. (Opening the mail requires a warrant.)

Interviews and court records also show that the surveillance program was used by a county attorney and sheriff to investigate a political opponent in Arizona — the county attorney was later disbarred in part because of the investigation — and to monitor privileged communications between lawyers and their clients, a practice not allowed under postal regulations.

Theodore Simon, president of the National Association of Criminal Defense Lawyers, said he was troubled by the audit and the potential for the Postal Service to snoop uncontrolled into the private lives of Americans. “It appears that there has been widespread disregard of the few protections that were supposed to be in place,” Mr. Simon said.

The Postal Service also uses a program called Mail Imaging, in which its computers photograph the exterior of every piece of paper mail sent in the United States. The program’s primary purpose is to process the mail, but in some cases it is also used as a surveillance system that allows law enforcement agencies to request stored images of mail sent to and received by people they are investigating.

Another system, the Mail Isolation Control and Tracking Program, was created after anthrax attacks killed five people, including two postal workers, in late 2001. It is used to track or investigate packages or letters suspected of containing biohazards like anthrax or ricin. The program was first made public in 2013 in the course of an investigation into ricin-laced letters mailed to President Obama and Michael R. Bloomberg, then New York City’s mayor, by an actress, Shannon Guess Richardson.

Despite the sweep of the programs, postal officials say they are both less intrusive than that of the National Security Agency’s vast collection of phone and Internet records and have safeguards to protect the privacy and civil liberties of Americans. “You can’t just get a mail cover to go on a fishing expedition,” said Paul J. Krenn, a spokesman for the Postal Inspection Service. “There has to be a legitimate law enforcement reason, and the mail cover can’t be the sole tool.”

Postal officials did not say how many requests came from agencies in charge of national security — including the F.B.I., the Department of Homeland Security and Customs and Border Protection — because release of the information, wrote Kimberly Williams, a public records analyst for the Postal Inspection Service, “would reveal techniques and procedures for law enforcement or prosecutions.”

Defense lawyers say the secrecy concerning the surveillance makes it hard to track abuses in the program because most people are not aware they are being monitored. But there have been a few cases in which the program appears to have been abused by law enforcement officials.

In Arizona in 2011, Mary Rose Wilcox, a Maricopa County supervisor, discovered that her mail was being monitored by the county’s sheriff, Joe Arpaio. Ms. Wilcox had been a frequent critic of Mr. Arpaio, objecting to what she considered the targeting of Hispanics in his immigration sweeps.

The Postal Service had granted an earlier request from Mr. Arpaio and Andrew Thomas, who was then the county attorney, to track Ms. Wilcox’s personal and business mail. Using information gleaned from letters and packages sent to Ms. Wilcox and her husband, Mr. Arpaio and Mr. Thomas obtained warrants for banking and other information about two restaurants the couple owned. The sheriff’s office also raided a company that hired Ms. Wilcox to provide concessions at the local airport.

“We lost the contract we had for the concession at the airport, and the investigation into our business scared people away from our restaurants,” Ms. Wilcox said in an interview. “I don’t blame the Postal Service, but you shouldn’t be able to just use these mail covers to go on a fishing expedition. There needs to be more control.”

She sued the county, was awarded nearly $1 million in a settlement in 2011 and received the money this June when the Ninth Circuit Court of Appeals upheld the ruling. Mr. Thomas, the former county attorney, was disbarred for his role in investigations into the business dealings of Ms. Wilcox and other officials and for other unprofessional conduct. The Maricopa County Sheriff’s Office declined to comment on Mr. Arpaio’s use of mail covers in the investigation of Ms. Wilcox.

In another instance, Cynthia Orr, a defense lawyer in San Antonio, recalled that while working on a pornography case in the early 2000s, federal prosecutors used mail covers to track communications between her team of lawyers and a client who was facing obscenity and tax evasion charges. Ms. Orr complained to prosecutors but never learned if the tracking stopped. Her team lost the case.

“The troubling part is that they don’t have to report the use of this tool to anyone,” Ms. Orr said in an interview. The Postal Service declined to comment on the case. Frank Askin, a law professor at the Rutgers Constitutional Rights Clinic, who as a lawyer for the American Civil Liberties Union successfully sued the F.B.I. nearly 40 years ago after the agency monitored the mail of a 15-year-old New Jersey student, said he was concerned about the oversight of the current program. “Postal Service employees are not judicial officers schooled in the meaning of the First Amendment,” Mr. Askin said.