Google's working on a nanoparticle-covered pill that can detect cancer

Google is developing tiny magnetic particles that could help detect cancer and other health problems by coursing through a patient’s bloodstream. 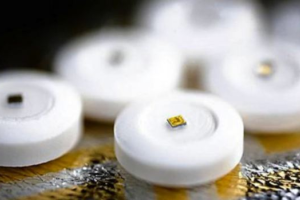 Andrew Conrad, head of the Google X research lab’s Life Sciences Team, told the WSJ.D Live conference Tuesday that the particles can be directed toward different parts of the body by applying wearable magnetic devices to the skin.

The wearable would be able to count the particles and possibly compile information about what potential medical conditions they detected. “Nanoparticles are the nexus between biology and engineering,” Conrad said in an interview at the conference, which was excerpted in a video. “We can make these nanoparticles behave in ways that we want them to do.”

The so-called Nanoparticle Platform comes in the form of pills that are covered with “antibodies or molecules that detect other molecules,” he added.

The particles would be less than one-thousandth the size of a red blood cell and would attach to molecules, proteins and cells in the body. The nanoparticles could help detect arterial plaque or high sodium levels, and might replace standard blood tests to detect early signs of disease, according to Conrad.

Conrad said Google would license the technology to other companies and it would not be responsible for managing information collected through nanoparticle monitoring.

Implementing the nanoparticles could take more than five years, The Wall Street Journal said in reporting the interview with Conrad.

The nanoparticle research isn’t Google’s first foray into medicine. Earlier this year, it said it was testing an advanced contact lens for people with diabetes that would serve as an alternative to pricking their fingers to test glucose levels.

The project, which also came out of the Google X lab, measures glucose levels in tears using a miniature wireless chip and a glucose sensor. Google said it was looking for partners in the effort to bring the technology to market.

Google X has been focused on developing game-changing technologies such as Google Glass, driverless cars and Project Loon, an effort to bring Internet access to remote places via a network of balloons.