Facebook simplified and shortened by two-thirds its description of how it uses data, responding to concerns that users didn’t understand its policies.

The update includes a new interactive tutorial called “Privacy Basics.” The goal, Facebook says, is to get more people to read and comprehend the terms they must agree to in order to use the service.

“Our goal is to make the information about Facebook as clear as possible,” said Erin Egan, Facebook’s chief privacy officer. “Our hope is that it won’t take long for people to read through this and really get it,” she said. Facebook said it will invite user comments on the new policy for a week. After reviewing the comments, Facebook says it will release a final version that will take effect 30 days later. The new policy is 2,700 words, down from more than 9,000, Facebook said. It is color-coded with graphics marking major subject areas, like “How do we use this information?” and “How can I manage or delete information about me?”

Facebook’s new “Privacy Basics” tutorial, under a headline of “You’re in Charge,” offers users instructions on how to manage information on the social network, including how to control who can comment and “like” postings and who can see photos that are shared. Genie Barton, who helps enforce behavioral-advertising guidelines for the Council of Better Business Bureaus, consulted with Facebook on the updated policy and said her organization had been pushing Facebook to make it simpler and clearer for users.

“If you write a policy for lawyers, it will be read by lawyers,” she said. “For users, it’s got to be completely different.” Facebook has come under scrutiny in the past for not adequately disclosing how it uses data gathered from users. In 2011, it entered into an agreement with the Federal Trade Commission, requiring it to ask users’ permission before changing the way personal information is gathered and handled. 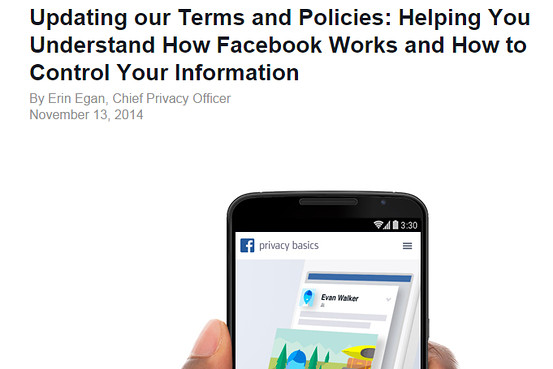 Since then, Facebook has taken steps to engage with privacy advocates and educate users on its policies. In June, it began allowing users to opt out of targeted ads on Facebook that are based on their browsing habits off of the network. In September, it offered a “Privacy Checkup” to all users, including tips on how to better control their data.

The changes don’t affect how much data Facebook collects, much of which it uses to target ads at users. In October, it began allowing marketers to advertise to Facebook users who visit or live near a business. Thursday, it said it would expand to more countries the program that targets ads based on browsing habits; it previously only operated in the U.S.

The new data-use statement offers more specifics on how Facebook tracks users. For instance, it specifies that Facebook may collect location information from users on its mobile apps through GPS, Bluetooth or WiFi networks. For purchases made on Facebook, the document specifies that Facebook collects credit-card information, shipping locations and contact details. Pam Dixon, executive director of advocacy group World Privacy Forum, said the new statement is a step in the right direction and said the Privacy Basics tutorial is “a huge improvement.”

Dixon, who also had been briefed by Facebook, urged the social network to let users opt out of participating in Facebook’s partnerships with third-party data brokers like Nielsen, Datalogix and Acxiom. Facebook combines its data with information from these companies, anonymously, to measure the effectiveness of advertisements. “We want to really simplify that,” Dixon said. “We want a one-click, get us out.” A Facebook spokeswoman said “it’s not technically feasible” for the company to create such a mechanism.