In the world of infrastructure security, a little bit of knowledge can go a long way toward protecting your organization. That's why we at Incapsula are always working hard to learn what's going on with the current state of DDoS attacks, including the top trends in DDoS attacks and how DDoS attackers are changing their methods. 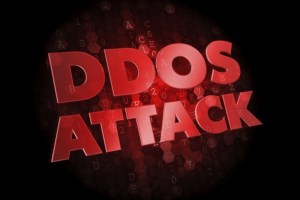 During our work, we noticed that there's little understanding out there about exactly how DDoS attacks put businesses at risk.

Some companies seem to ignore the risk altogether, while others know the danger is real, but are unsure exactly what that entails. That's why we thought that it would be a good idea to show the actual impact that DDoS attacks can have on a business. With that in mind, we prepared our first DDoS Impact Survey, which we'll be reviewing briefly in this post. You can also check out the infographic below, for some of the report’s highlights.

How Was This Survey Conducted?

In order to gather data for this survey, Incapsula worked with 270 companies from different industry verticals across the United States and Canada. Representatives from these companies were asked a series of questions about their experiences with DDoS attacks. We then compiled the results of the survey into data points we could draw insights from. 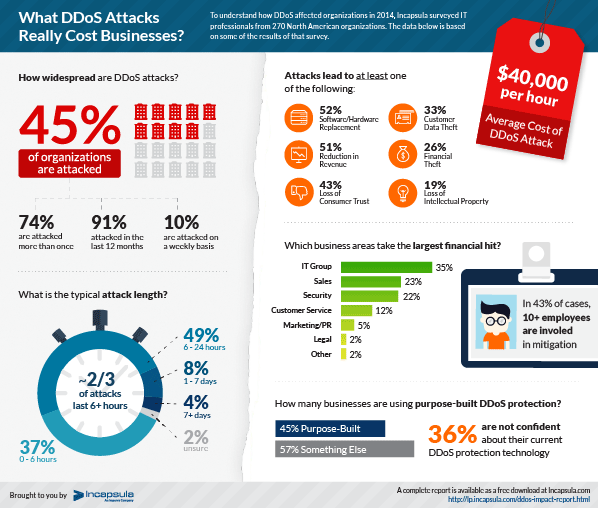 Here is an example of some of the information that the survey discovered:

“49% of DDoS attacks last between 6-24 hours. This means that with an estimated cost of $40,000 per hour, the average DDoS cost can be assessed at about $500,000—with some running significantly higher. Costs are not limited to the IT group; they also have a large impact on units such as security and risk management, customer service, and sales."

What Does This Survey Cover?

The survey results provided a lot of interesting insights about the current state of DDoS attacks.

More specifically, the survey includes data points such as:

Which industries are most likely to be targeted by an attack.

How much downtime businesses typically suffer in the wake of an attack.

How often businesses are given "ransom notes".

The non-financial costs of an attack.

The cost per hour of an attack.

What DDoS defenses organizations are using, and how well these defenses work.

Who Is This Survey For?

This survey is meant for those individuals who are in charge of IT within their organization. It is meant to serve as a resource to help them educate others in their company and spark positive change. Because so many businesses underestimate the threat of an attack, they do not spend the necessary time and resources needed to create a DDoS response plan. This is often because the people within an organization who see the danger posed by a DDoS attack—those actually working in the IT space—have trouble convincing their managers that the threat is real.

When executives within a company can't be persuaded that a problem exists, they won't take the necessary precautions. The result: these organizations take minimal steps toward protecting themselves from DDoS attacks, leaving them vulnerable. It is our hope that this survey document will lay out the dangers posed by DDoS attacks in straightforward and easy-to-understand terms. After reading this survey, you should have a clear picture of both the monetary and non-monetary costs of DDoS.

Our goal is to arm IT specialists with the knowledge and data necessary to educate key decision makers like CEOs and CFOs. Hopefully, these individuals will gain a better understanding of the risks facing their organizations and invest in DDoS mitigation solutions to address those risks.

DDoS attacks are just like many other events in the business world: you can't argue with real numbers. If you work in an organization that has trouble understanding what level of threat it faces from DDoS attacks, or if you have trouble convincing others within our organization that the threat is real, this is the document you need to spur greater understanding and get the ball rolling.