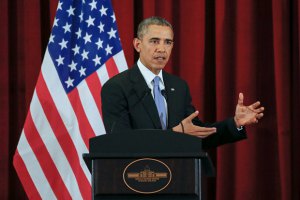 In a series of speeches, Mr. Obama will call for better safeguards against identity theft, improved privacy protection, enhanced cybersecurity for the government and private companies, and increased access to high-speed broadband connections across the country.

A White House official said in a statement to reporters that the president would “lay out a series of legislative proposals and executive actions that will be in his State of the Union that will tackle identity theft and privacy issues, cybersecurity, and access to the Internet.” The president’s proposals are part of what the White House calls “SOTU Spoilers,” a series of announcements that preview Mr. Obama’s State of the Union address, which he is scheduled to deliver to a joint session of Congress on Jan. 20.

Presidents typically keep State of the Union proposals secret until the last minute, hoping to maximize the political power of the speech. But the White House decided to reverse that strategy, rolling out proposals in the hope of building momentum for the address.

“I wanted to give you a little preview,” Mr. Obama told an audience on Friday in Knoxville, Tenn., where he unveiled a plan to make the first two years of community college free for all students. “Don’t tell anybody I said this. I’m giving you the inside scoop.” In recent days, Mr. Obama also discussed the recovery of the auto industry in Detroit and announced housing proposals during a speech in Phoenix. Officials said he would unveil his high-tech proposals in remarks next week at the Federal Trade Commission and the National Cybersecurity and Communications Integration Center. Mr. Obama will also travel to Iowa, where he will discuss access to high-speed broadband.

Concern about cybersecurity and safety has increased after the recent hack on Sony Pictures, which the United States government says was the work of the North Korean government. Mr. Obama has tried for three years to persuade Congress to pass a cybersecurity bill, and administration officials hope that the severity of the Sony attack and the hacking of retailers like Home Depot and Target will change the political dynamic. But businesses are still wary of new federal requirements, and Mr. Obama now faces a Congress controlled by Republicans who are skeptical of his proposals.

Saturday’s announcement by the White House also did not make clear whether the president intended to confront some of the toughest questions raised by the recent hacking: When should the federal government step in to fight hackers? And is America’s own use of cyberweapons a complicating factor? The White House also said Vice President Joseph R. Biden Jr. would travel next week to Norfolk, Va., to announce new funding to help train people to work in the field of cybersecurity.