Google claims that Android 5.1 will have safeguards for stolen phones

Android 5.1 arrives with HD calling and safeguards for stolen phones. After weeks of teasing, it's here: Google has officially unveiled Android 5.1 Lollipop. 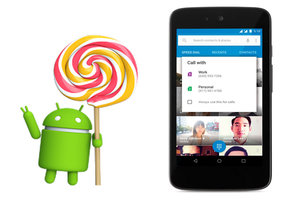 The new release focuses on support for features that usually depend on extra software to work, such as multiple SIM cards (handy for prepaid service in countries like China and India) and higher-quality HD voice calls on networks like T-Mobile or Verizon.

You can control your WiFi networks and Bluetooth devices from the quick settings area, too. However, the biggest deal may be something you'll hopefully never have to use refers to security: Device Protection. Android 5.1 will let you require a Google account sign-in if your device is stolen, even if it's reset to factory settings. In other words, a thief can't simply wipe the storage on your phone and pawn it off. The feature will only be available on hardware shipping with Android 5.1 as well as the Nexus 6 and Nexus 9, but it could reduce the incentives to swipe your stuff in the long run.

So, when can you get Android 5.1? You might see it quickly, depending on the gadgets you're using. T-Mobile USA has already hinted that the Nexus 4, 5 and 7 (2013) could get their 5.1 upgrades as early as today. It's reasonable to presume that the Nexus 6 and 9 will be part of this first wave as well. As for everyone else? Be prepared to wait -- HTC, Samsung and many other vendors are still finishing their 5.0 rollouts, so it could be a while longer before they catch up.