The average large global enterprise has about 2,400 unsafe apps installed on the mobile devices in its environment, according to a new Veracode study. 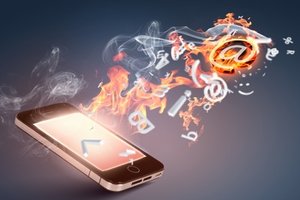 The apps in question are publicly available apps popular among users, not enterprise ones. Many users are downloading these apps and installing them on devices, often the same one they are using to access enterprise applications and services.

Enterprises have to manage what employees are installing on company-issued mobile devices while also managing employee-owned devices as part of a comprehensive bring-your-own-device (BYOD) program. Context is important when looking at these numbers. For this study, Veracode analyzed more than 400,000 of the most popular mobile apps from Apple's App Store and Google Play. About 14,000 apps, or just 3 percent, had security problems. Issues include embedded spyware, adware and back-doors, the study found. Even so, enterprises should not be complacent as their information remains at risk.

Issues include the ability to know when phone calls are coming in, to send text messages, to record audio, to read the root file system, track the user's location, check if the device has been rooted, and to get identifying information about the user, the device and its carrier.

Veracode found that 85 percent of the 14,000 unsafe apps exposed sensitive data stored on the SIM card, such as phone location, call history, phone contacts, SMS message logs, device IDs, and carrier information. About 37 percent of the apps performed what Veracode called "suspicious security actions," such as checking if the device was rooted (Android) or jailbroken (iOS), installing or uninstalling other apps, or running other processes. The app may check if the device had been rooted or jailbroken if it wants to perform superuser actions such as recording conversations, disabling anti-malware or other security apps, replacing firmware, or viewing cached credentials such as banking passwords.

“Many mobile apps are unsafe because they unknowingly access insecure third-party libraries and frameworks in the software supply chain – while other apps have been specifically designed to perform malicious actions,” said Chris Wysopal, Veracode's co-founder, CISO and CTO. About 35 percent retrieved or shared personal information such as browser history and calendar events with "suspicious overseas locations," Veracode said. Many users don't think twice about app permissions and what kind of information is being collected because so many popular apps partner with advertising networks and display ads. Attackers could use the data to develop a complete profile of users and their social connections.

The study spanned multiple industry sectors, including financial services, media, manufacturing, and telecommunications. Veracode analyzed mobile apps installed on devices in actual corporate environments. While most modern MDM systems enforce corporate policies on managed devices, many don't have the ability to maintain up-to-date information about the safety of all the apps available publicly on app stores.