Highly sensitive details of the pension pots of millions are being sold for as little as 5p and ending up in the hands of criminals. An investigation reveals how private financial information is being passed on by firms without their customers’ knowledge. 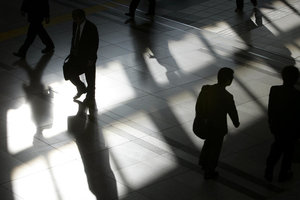 This valuable data is then repeatedly sold on, ending up in the hands of fraudsters and cold-calling firms. The troubling revelations come on the eve of major government reforms that will hand millions the chance to cash in their pension pots – giving them access to huge sums previously locked away.

They will renew fears the reforms could trigger a flood of scams on the elderly and vulnerable whose newly-available funds will be rich pickings. Last night the Information Commissioner’s Office (ICO) vowed to pass evidence uncovered to police and began an immediate inquiry into the firms involved. A Cabinet minister praised the investigation and promised action. The undercover reporters targeted data firms, posing as a cold-calling company looking for people with pensions to whom they could sell investments.

We found some firms were willing to sell financial data on thousands of people without making any checks on what it would be used for. A director of one firm – B2C Data – boasted he had access to the salaries, investments and pensions of ‘a million people’. The information he sold to the reporter includes details of the salary, pension pots and investments of 15,000.

Such information would be a godsend to criminals looking to exploit those approaching retirement. When shown the evidence relating to B2C, Steve Eckersley, the head of enforcement at the ICO, said: ‘This is, on the face of it, a very worrying breach of the Data Protection Act, and we will be investigating the details further.’ When speaking to undercover reporter, B2C director Nick Sayer lied, claiming the firm’s financial information was primarily obtained from financial advice firm Sesame.

Sesame categorically denies having any relationship with Sayer or B2C. Indeed, the company worked closely with independent IT security experts to examine the data given to reporters. Those experts have since confirmed it was not from Sesame’s database.  There is now an urgent investigation underway to establish how the information was obtained by B2C.

When security experts contacted some of the 15,000 on the database, they were horrified to hear their details had been sold and said they had never consented to the information being used in such a way. They revealed that they had been inundated with cold calls from conmen who seemed to know their highly sensitive personal information.

One said he had been targeted by callers who seem to ‘know more about my life than I do.’ Others have been plagued by up to five calls a day. Experts have warned that the pension reforms that come in on April 6 – which will see millions given access to their life savings and the ability to use their pension pots like a cash machine – could result in scams on a massive scale.