5 tech trends that will hit every retail store by 2020

Showrooming — the practice of shoppers using retail stores to discover products they’d like to buy, then completing their purchases online where they can find better deals — is often cited as a concern of physical retailers. 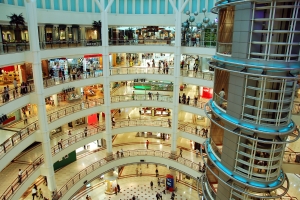 With an enticing mix of low prices, breadth of selection, and convenience, online retailers attract shoppers in ways that brick-and-mortar stores struggle to compete with.

eMarketer reported that global e-commerce sales hit $1.3 trillion at the end of 2014, an increase of 22 percent over 2013. Meanwhile, growth at U.S. retail outlets is in the low single digits, according to figures from the U.S. Department of Commerce collected by Business Insider. But the prospects aren’t all grim for physical stores. In fact, retail security experts believe there’s a tremendous opportunity ahead as the worlds of online and offline commerce begin to converge. “We will see more disruption in the next 10 years of retail than we did in the previous 1,000,” said Doug Stephens, founder of Retail Prophet. Here are five predictions for how brick-and-mortar commerce will look in 2020:

Rather than competing with showrooming, brick-and-mortar stores in 2020 will begin to embrace it. “Stores will become like museums—we will go to see something, to learn and be entertained,” predicted Thomas Keenan, adjunct professor at the University of Calgary and author of a book called Technocreep, which explores the future of technology.

Further, beacons—sensors placed around stores that communicate information to smartphones—will track information such as which products customers linger around. The beacons can then push information on those products to customers’ mobile devices, allowing them to order from their devices and have merchandise shipped to their homes. Beacons are already deployed at large retailers such as Lord & Taylor as a way to provide more interactive shopping experiences.

2. Analytics will be commonplace in physical stores

E-commerce retailers have had a leg up over their brick-and-mortar counterparts in terms of their ability to selectively target customers based on insights into consumers’ preferences and habits, as well as their ability to refine their tactics continually based on insights they glean via analytics. By 2020, offline retailers will have the same tools available to them and will employ them widely. Whether it’s using analytics to map where people walk and what they pick up to better position products in the store or tracking shoppers at the device level to target promotions to them, data will be used to understand customers and increase sales.

Keenan foresees the rise of more intelligent devices in stores that can determine the demographic information of customers as they walk by, and target ads to them through a video console, similar to the smart shelves being developed by Mondelēz International. As more customers start opting in to apps that allow them to be identified individually, they’ll receive the benefits of more customized experiences and offers; however, retailers should also be mindful of mounting consumer privacy concerns.

Apple’s foray into mobile payments signals the mobile payment model may soon be ubiquitous. By 2020, not only will more transactions take place via our mobile devices or fitness bracelets, whether it’s our smartphones or wearable technology leveraging near-field communication (NFC) technology, we’ll also see the emergence of even more streamlined payment experiences.

The goal for companies is to make the payment process as seamless as possible. Starbucks’ new mobile payment app — which allows customers to pre-order and pre-pay for beverages via their iPhone before arriving at a Starbuck’s location — is just one recent example of how businesses are moving toward more frictionless payment and checkout experiences. Keenan predicted at large retailers like Costco, shoppers will simply walk out of the store while the merchandise in their carts is automatically tallied and the total charged to their accounts.

4. Retailers will make better use of sensory technology

Retail stores will have more awareness of our emotions and how to excite our senses in 2020. Using Emotient, retailers can detect when consumers react positively or negatively to things such as signs, product displays and interactions with sales associates. This will allow retailers to aggregate data on customer sentiment and to adapt offers in real time based on how customers are feeling.

Keenan also predicts technology that subtly leverages our senses will be used more pervasively within stores, with greater emphasis on the smell within a store or other sensory details, such as music. Experiencing this type of store can develop a lasting, physical impression of the brand with the consumer, which may stimulate a purchase decision at a later date or online.

Technology will increasingly automate a lot of routine and mundane work that happens in retail institutions. Whether it’s more self-service check-outs, ​in-store mapping to make it easier for customers to self-navigate around stores, or beacon and NFC safe technology for greater self-education on products, technology will play a greater role in automating the retail experience. In addition, retailers will be able to take advantage of managed infrastructure at the edge. This is a vitally important enabler because having to add relatively expensive IT staff can make deploying new technologies in retail environments cost prohibitive.

Of course, sales people won’t disappear. Rather, with many of their routine tasks automated, they will be able to focus on building relationships with customers while increasing sales and affinity for their employers. E-commerce has certainly revolutionized the way we shop, but brick-and-mortar stores are far from dead. Increasingly, online retailers have begun opening physical stores for the first time, which signals that there may be a return to real world shopping – only this time, reinvented for the digital age.