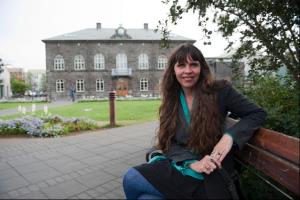 Famed whistleblower Edward Snowden has friends in high places in small countries. No new passport has yet been forthcoming, but changing politics in Iceland may also bode well for Snowden’s search for a new home and security.

When I met with Jonsdottir at the Pirate Party’s small office within Iceland’s small parliament building in Reykjavik this week, she kicked off the interview without any prompting by sharing the news that the Academy Award-winning documentary about Snowden, “Citizenfour,” had recently been well received at its Icelandic premiere. I took the opportunity to ask if she was still pursuing Icelandic citizenship for the controversial American after nearly two years of being blocked in the Althingi (Iceland’s parliament).

“If I become the interior minister, that’s definitely happening.” she responded with a laugh, acknowledging that under Iceland’s Nationality Act, granting citizenship to Snowden would probably require approval by parliament. At the moment, Jonsdottir is one of just three members of the Althingi that represent the Pirate Party, but a survey conducted in March found that the pirates had become the most popular party among Icelanders, and a sudden increase in registrations with the party this year seems to back up the sentiment. If the pirates were to greatly increase the mere five percent of seats in the Althingi they currently hold and/or forge a strong alliance with the other opposition parties in Iceland, citizenship for Snowden could suddenly be within reach.

“I think it’s dangerous to just give him asylum because asylum does not give you the same security and protections as citizenship,” she told me, arguing that making Snowden an Icelander would also be in the better interest of U.S. foreign relations with Russia. “ It is much better for the U.S. government to have Snowden in Iceland or Germany than in Russia… because Snowden, he is his own man, but it is uncomfortable to have him there and it’s dangerous for him any which way you look at it because there is a propaganda war (between the Kremlin and Washington), and I can’t imagine it’s good for anyone in his position to be used in a propaganda war.”

Jonsdottir does have some experience in minting new Icelandic citizens. She played a role as an activist in the campaign to grant citizenship to chess champion Bobby Fischer, who lived out his final years in the island nation. Jonsdottir said she plans to “reopen communications” on the issue in the coming months in conjunction with a resolution she is working on at the International Parliamentary Union that would call for enshrining privacy and freedom from surveillance as a human right. While 166 nations are members of the IPU, notably the US is not one of them.