The European Union accused Google Inc on Wednesday of cheating consumers and competitors by distorting Web search results to favour its own shopping service, after a five-year investigation that could change the rules for business online. 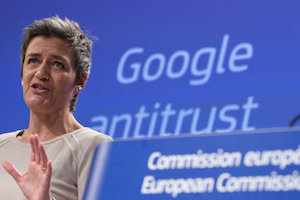 It also started another antitrust investigation into the Android mobile operating system, a key element in Google's strategy to maintain revenues from online advertising as people switch from Web browser searches to smartphone security apps.

EU Competition Commissioner Margrethe Vestager said the U.S. company, which dominates Internet search engine markets worldwide, had been sent a Statement of Objections - effectively a charge sheet - to which it has 10 weeks to respond. Investigations into Google's business practices in other areas would continue. The shopping case, on which the EU has had the most complaints dating back the longest time, could potentially set a precedent for concerns over Google's search products for hotels, flights and other services. In February, Russia's biggest search engine filed a complaint with the authorities, so Google faces the prospect of a fresh competition investigation after. Yandex alleges that its rival has an unfair advantage because it insists device-makers set Google as the default search setting if they want to pre-install its Play store.

Vestager, a Dane who took over the politically charged case in November, announced the moves on the eve of a high-profile visit to the United States. Her findings follow nearly five years of investigation and abortive efforts by her Spanish predecessor, Joaquin Almunia, to strike deals with Google. "I am concerned that the company has given an unfair advantage to its own comparison shopping service, in breach of EU antitrust rules," she said. Google could face fines, she warned, if the Commission proves its case that it has used its "near monopoly" in Europe to push Google Shopping ahead of rivals for the past seven years. Google rejected the charges. Its shares closed up 0.40 percent on Wednesday after earlier losing 1 percent. Meanwhile, Google's rivals are pushing U.S. antitrust enforcers to investigate the use of Android, two people with knowledge of the matter said.

Analysts said the EU charges were unlikely to hurt Google's evaluation because it reflected the regulatory risk. If recent history of EU probes into tech companies is an indicator, however, Google shares may have trouble moving forward until the issue is resolved. In its first reaction, the Mountain View, California-based company said in a blog post that it strongly disagreed with the EU's statement of objections and would make the case that its products have fostered competition and benefited consumers.

"Android has been a key player in spurring this competition and choice, lowering prices and increasing choice for everyone (there are over 18,000 different devices available today)," it said of its free operating system for mobile devices. The Commission, whose control of antitrust matters across the wealthy 28-nation bloc gives it a major say in the fate of global corporations, can fine firms up to 10 percent of their annual sales, in Google's case up to 6.2 billion euros.

If it finds that companies are abusing a dominant market position, the EU regulator can also demand sweeping changes to their business practices, as it did with U.S. software giant Microsoft in 2004 and chip-maker Intel in 2009. Its record antitrust fine was 1.09 billion euros on Intel. Competition lawyer Bertold Baer-Bouyssiere at DLA Piper in Brussels said: "Even more than Microsoft, this case will shape the landscape for the digital sectors in the years to come."

Rejecting suggestions - recently from President Barack Obama himself - that the EU was pursuing an anti-American, protectionist policy, Vestager, a liberal former economy minister, said about a quarter of the firms which had complained to the EU authorities about Google were themselves U.S.-owned. She insisted that political pressure had played no part in her decision to accuse Google. Nationality or successful market domination were not issues for her, only the abuse of market power.

In a mark of the emotion U.S. tech hegemony evokes among Europeans who fear economic eclipse, the EU parliament last year voted a non-binding resolution urging the Commission to consider breaking up Google. The EU action so far is unlikely to have such a dramatic effect, though it could crimp future business. Google now had a chance to explain itself, Vestager said, and the case might be settled by it making further commitments to change its products. She wanted a change in the "principle" underlying searches rather than a redesign of current Web pages or tweaks to algorithms by which Google ranks results. That way, any remedy would be "future-proof" against technological change.

Of the investigation into Android, which analysts said could prove a bigger threat to Google's future profitability, Vestager said: "I want to make sure the markets in this area can flourish without anticompetitive constraints imposed by any company." The focus on the ranking of searches for shopping sites did not address all complaints lodged with the Commission. Vestager stressed her antitrust staff would continue to investigate other areas of concern, including alleged "web scraping" to copy rivals' content, and restrictive practices on advertising. A final resolution - quite possibly involving court action if Google does not choose to settle - is likely to take many months and probably years, legal and security experts said.

Google's critics welcomed the decision to pursue the U.S. giant, though many industry experts believe the action is unlikely to markedly shift existing business their way. Rather, by firing a shot across Google's bows, it may favour competitors in new areas as technology develops, a priority for the new European Commission led by Jean-Claude Juncker, which wants to foster home-grown enterprise.

Michael Weber of German online mapping service Hot-Map.com told Reuters: "After so many years with everyone thinking that we were crazy, it's good to see something happening. The sun is shining today." Vestager's action won cross-party endorsement in the European Parliament. In a statement headlined "Even Uncle Google must play fair", German lawmaker Manfred Weber, floor leader of the largest conservative group, said: "Internet is not the Wild West - there are rules on the web that must also be respected."

French Socialists Pervenche Beres and Virginie Roziere applauded the Commission for "at long last" taking action against "the threat posed to the European economy" and renewed their call for the breakup of Google. American domination of the Internet and other new technology sectors has prompted a mixture of admiration and anxiety in Europe. U.S. authorities that looked at Google's business have taken no action. Vestager said she was not concerned that that difference in approach weakened her case: "It's a different market," she told. While Google has over 90 percent of the EU search market, it has only two thirds of its home market.

The Initiative for a Competitive Online Marketplace, an alliance of businesses, applauded the Commission for taking what it called "decisive action to end Google’s years of abusive behaviour in its long-running antitrust case". German Economy Minister Sigmar Gabriel welcomed Vestager's action. Germany, backed by major companies in the EU's biggest economy, has been particularly vocal in pressing the Commission to act against Google.