CareFirst, a Blue Cross Blue Shield plan, on Wednesday became the third major health insurer in the United States to disclose this year that hackers had breached its computer systems and potentially compromised some customer information. 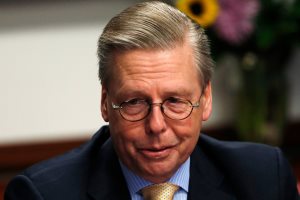 The attack could affect as many as 1.1 million of its customers, but CareFirst said that although the hackers gained access to customer names, email addresses and birthdates, they did not obtain sensitive financial or medical information like Social Security numbers, credit card information and medical claims.

The company, which has headquarters in Maryland and serves the Washington area, said the attack occurred in June and described it as “sophisticated.” Chet Burrell, CareFirst’s chief executive, said the company contacted the Federal Bureau of Investigation, which is investigating attacks against the insurers Anthem and Premera. “They are looking into it,” he said. While it was not clear whether the attacks were related, he said the company was under constant assault by criminals seeking access to its systems.

Federal officials have yet to label the breaches at Anthem and Premera Blue Cross as state-sponsored hackings, but the F.B.I. is effectively treating them as such, and China is believed to be the main culprit, according to several people who were briefed on the investigations but spoke on the condition of anonymity. There are indications the attacks on Anthem, Premera and now hacked CareFirst may have some common links.

Charles Carmakal, a managing director at Mandiant, a security firm retained by all three insurers, said in an emailed statement that the hacking at CareFirst “was orchestrated by a sophisticated threat actor that we have seen specifically target the health care industry over the past year.” The Breaches at Anthem, which is one of the nation’s largest health insurers and operates Blue Cross Blue Shield plans, and Premera Blue Cross, based in Washington State, were much larger. The one at Anthem may have compromised the personal information of 79 million customers and the one at Premera up to 11 million customers.

Anthem has said the hackers may have stolen Social Security numbers but did not get access to any medical information. Premera said it was possible that some medical and bank account information may have been pilfered. CareFirst said it was aware of one attack last year that it did not believe was successful. But after the attacks on other insurers, Mr. Burrell said he created a task force to scrutinize the company’s vulnerabilities and asked Mandiant, a division of FireEye, to perform a forensic review of its systems. Last month, Mandiant determined a breach had occurred in June 2014.

Health insurance firms are seen as prime targets for hackers because they maintain a wealth of personal information on consumers, including medical claims records and information about credit card and bank accounts. In recent years, the attacks have escalated, said Dr. Larry Ponemon, the chairman of Ponemon Institute, which studies security breaches in health care. He said the health care industry was particularly vulnerable and that the information it had was attractive to criminals who use the data to steal the identity of consumers.

“A lot of health care organizations have been historically laggards for security,” he said. Insurers say they are now on guard against these attacks. But Dr. Ponemon said they had taken only small steps, not “huge leaps,” in safeguarding their systems. The motivation of the hackers in these cases, however, is unclear — whether they are traditional criminals or groups bent on intelligence-gathering for a foreign government. In the retail and banking industries, the hackers have been determined to get access to customer credit card information or financial data to sell on the black market to other online criminals, who then can use it to make charges or create false identities.

So far, there is scant evidence that any of the customer information that might have been taken from Anthem and Premera has made its way onto the black market. The longer that remains the case, the less likely that profit was a motive for taking the information, consultants said. That suggests that the hackers targeting the health care industry may be more interested in gathering information.

“It’s such an attractive target and it’s a soft target and one not traditionally well protected,” said Austin Berglas, head of online investigations in the United States and incident response for K2 Intelligence and a former top agent with the F.B.I. in New York. “A nation state might be looking at pulling out medical information or simply looking to get a foothold, which they can use as a testing ground for tools to infiltrate other sectors,” he said.

Paul Luehr, a managing director at Stroz Friedberg, a security consulting firm, said the health care breaches could be an entry point into other systems. “It could serve as a conduit to valuable information in other sectors because everyone is connected to health information,” he said. Or the breaches could simply be crimes of opportunity. The hackers could be making off with information and waiting to determine what to do with it.

“We want to jump to the conclusion that there is an organized chain and command,” said Laura Galante, threat intelligence manager for FireEye, who was not commenting specifically on any particular breach. “But what could be happening here is much more chaotic. It’s simply, Get whatever data you can get and figure out what to do with it later.’”