Your smartphone's secrets could help you bag a bank loan

WHEN Kyle Meade first moved to the US from Canada, he just couldn't get a loan. "I had no debt, no previous information on me in the US," he says. "The highest I was offered was $300, because I'm credit thin." 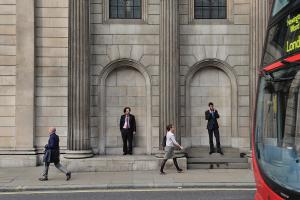 For Meade, innovation director of credit-scoring company Entrepreneurial Finance Lab (EFL), the situation was ironic. For millions of people around the world, particularly those in developing countries, it's a frustrating reality.

Without a robust financial history, banks have trouble gauging how risky a person is, and are hesitant to give them the loan they might need to start a business, buy a house or go to school. What do you do when the system rejects you? One security answer could be to pull out your phone. A handful of finance start-ups are betting that metadata – the vast amount of data amassed by our cellphones or internet activity – can drive a new generation of banking. Daniel Björkegren, an economist at Brown University in Providence, Rhode Island, is working with EFL to predict whether someone will pay back a loan based on their cellphone data.

He combed through the phone records of 3000 people who had borrowed from a bank in Haiti, looking at when calls were made, how long they lasted and how much money people spent on their phones. The algorithm looks at this metadata to get a sense of a person's character. Do they promptly return missed calls and pay their phone bills? That suggests they might be more responsible. Are most of their calls made in an area far away from the bank branch? Then it may be hard for the bank to keep tabs on their whereabouts. Björkegren found that the bank could have reduced defaults by 43 per cent by using the algorithm to pick better people to give loans to. The results were presented at the NetMob conference in Cambridge, Massachusetts, earlier this month.

Since many use their phones daily, the metadata can reflect changes in people's lives very quickly, says Qiuyan Xu, chief data scientist at Cambridge start-up Cignifi. Cignifi is studying how mobile data might be used to predict whether people will repay loans and how much money they will save. Their research has found that the time of day people make calls and the sorts of neighbourhoods they are calling can be useful indicators.

"Mobile data touches our daily lives," Xu says. "It's a powerful way to predict user behaviour." The idea carries some risks, says Yanhao Wei at the University of Pennsylvania in Philadelphia. For example, companies might be unduly suspicious of people who opt out of sharing anything. "You may give people the choice to give data or deny data, but in those cases, denying itself is a bad sign," says Wei. There's also the question of privacy – how can a program sift through all this data while still keeping it secure?

Still, several start-ups have already tried making the jump. Inventure in Santa Monica, California, makes an app that monitors phone use and helps people keep track of their daily cash flow, information that then combines with demographic data to produce a credit score. In a pilot project last year in South Africa, Inventure gave out smartphones on credit to a small pool of people, who then used the app as they paid the company back.

Another start-up, Lenddo, has brought its algorithm to the Philippines and Colombia. This also looks at a person's social media accounts – Facebook, Twitter and LinkedIn – counting how many people someone is connected to, how often they interact and whether their online friends have good credit scores themselves. The software has helped people get loans for phones and motorcycles. "Although many individuals who want to take out loans in developing countries don't have financial histories, they do have mobile phones," says Björkegren. "For the first time, it's possible to get detailed data about people who are marginalised economically."

It should be mentioned that "VimpelCom" (brand "Beeline"), together with several banks to implement a pilot project to evaluate potential borrowers (scoring) based on the analysis of data about its subscribers. The project involves about 20 banks. It is assumed that the operator will sell credit institutions scoring-score generated on the basis of data on consumer behavior.