Before Betsy Chao, a senior here at Rutgers University, could take midterm exams in her online courses this semester, her instructors sent emails directing students to download Proctortrack, a new anti-cheating technology. 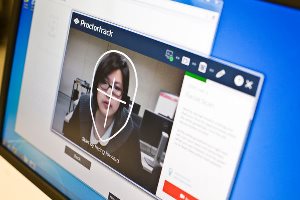 “You have to put your face up to it and you put your knuckles up to it,” Ms. Chao said recently, explaining how the program uses webcams to scan students’ features and verify their identities before the test.

Once her exam started, Ms. Chao said, a red warning band appeared on the computer screen indicating that Proctortrack was monitoring her computer and recording video of her. To constantly remind her that she was being watched, the program also showed a live image of her in miniature on her screen. Even for an undergraduate raised in a culture of selfies and Skype, Ms. Chao found the system intrusive. “I felt it was sort of excessive,” she said. As universities and colleges around the country expand their online course offerings, many administrators are introducing new technologies to deter cheating. The oversight, administrators say, is crucial to demonstrating the legitimacy of an online degree to students and their prospective employers.

Some schools use software that prevents students from opening apps or web browsers during online exams. Others employ services with live exam proctors who monitor students remotely over webcams. But the rise of Proctortrack and other automated student analysis services like it have raised questions about where to draw the line, and whether the new systems are fair and accurate. The University of North Texas Health Science Center, for instance, is partway through a two-year pilot test of Proctortrack involving the 160 students enrolled in its online public health master’s degree program.

“If you are going to offer online learning, you need to find ways to ensure the integrity of the course, the test-taking and the degree,” said Jeff Carlton, a university spokesman. “For us, this is high-stakes.” These schools are not simply trying to protect the academic integrity of their brands. They are seeking to stay competitive in a rapidly expanding industry. The market for online higher education could reach $32 billion in the United States this year, up from $25 billion in 2012, according to estimates from Eduventures, a research firm in Boston.

And the increased oversight of test-taking only intensifies a college experience that is monitored and analyzed more than ever. More than 3,500 institutions of higher learning, for instance, use an automated plagiarism detection system called Turnitin, which scans students’ papers for copied passages. And at Utah Valley University in Orem, the school developed its own early warning system, called Stoplight, which uses academic and demographic details about students to predict their likelihood of passing specific courses; as part of the program, professors receive class lists that color-code each student as green, yellow or red.

Proctortrack works along similar lines. The software, developed by Verificient Technologies, is marketed as “the world’s first automated remote proctoring solution.” Although some schools are still evaluating Proctortrack, Rutgers has already deployed it among several thousand students, the company said.

Tim Dutta, Verificient’s chief executive, said his company’s chief technology officer came up with the idea for the service after he worked on a project for the Transportation Security Administration which involved scanning airport security video footage for abnormal facial expressions. Proctortrack uses algorithms to detect unusual student behavior — like talking to someone off-screen — that could constitute cheating. Then it categorizes each student as having high or low “integrity.”

Mr. Dutta said the program was not so much intended to identify cheaters as to authenticate the identity of students enrolled in online courses. “We are really about ensuring the integrity of that online credential,” he said. Proctortrack, however, seems to impose more onerous strictures on students than a live proctor would. Among other things, it requires students to sit upright and remain directly in front of their webcams at all times, according to guidelines posted on the company’s site.

“Changes in lighting can flag your test for a violation,” the guidelines say. And, “Even stretching, looking away, or leaning down to pick up your pencil could flag your test.” Once students finish their exams, their instructors can log on to a server to review video clips of the incidents the system has flagged as possible infractions.

Jeffrey Alan Johnson, assistant director of institutional effectiveness and planning at Utah Valley University, compared Proctortrack’s approach to a controversial T.S.A. airport security screening program intended to identify terrorists; the government’s list of suspicious behavior included gazing down and excessive yawning, according to a document. “We are seeing similar things with Proctortrack,” said Mr. Johnson, who has conducted research on information technologies and social justice. “It’s built on this belief that human behavior can be reduced to an algorithm and, if you deviate from that behavior, it’s a problem.”

Peter Gambino, a Rutgers sophomore, first heard about Proctortrack after he had enrolled in an online music theory course. His professor emailed the class saying that Proctortrack was “a brand-new requirement this semester” for certain online courses and that students would have to pay a fee of $37 to use it. Mr. Gambino said he would not have taken the course had Rutgers informed students of the details in advance.

“It would be a much different thing if this surveillance was being imposed on anyone other than the students, effectively with no notice,” Mr. Gambino said. “I’m pretty sure that teachers would quit outright if they had to grade papers in the privacy and security of their own homes and be monitored and be forced to pay for it out of their own pocket.”

Ms. Chao even started a petition on Change.org asking Rutgers to rescind the program. Two days later, a university spokesman told a local New Jersey newspaper that Proctortrack was not mandatory for students. Ms. Chao said administrators had since offered to provide her with a live human proctor for a fee of $40 per exam. But seeing as she is taking two online courses with both midterm and final exams, she said the $160 proctoring fee — on top of the $100 tuition surcharge the school imposes for each online course — would be cost-prohibitive for her.

Rutgers itself seemed to disavow responsibility for the administrators who originally required students to use Proctortrack. “From an institutional point of view, use specifically of Proctortrack is not mandatory, and traditional face-to-face proctoring has been an acceptable alternative all along,” Richard Novak, Rutgers’ vice president for continuing studies and distance education, said in an email. As for charging security and privacy-minded students a higher fee for live proctors, he wrote, “This decision was made by the academic unit charging the fee.”

In hopes of alleviating students’ concerns, Verificient recently posted a pledge on its blog saying that Proctortrack did not share students’ data with third parties; that it typically deleted students’ data after 30 to 60 days; and that students could remove the software from their computers once they had uploaded their test data.

But the company has not changed its privacy policy — which states that it may unilaterally amend its policies at any time and that it may disclose users’ personal information to third-party service providers or in the event of a company merger, sale or bankruptcy. Students like Ms. Chao say they hope university administrators will consider the civil liberties implications of emergent tracking technologies, not just the expediency. “They are trying to make recording students a regular part of online courses,” Ms. Chao said. “You don’t know what new norms are going to be established for what privacy is.”