Talking Barbies are ushering in a new era of mass surveillance

One of my great pleasures in life is attending conferences on fields I'm intrigued by, but know nothing about. So when my friend Kate Crawford invited me to a daylong “Listening Machine Summit,” I could hardly refuse. 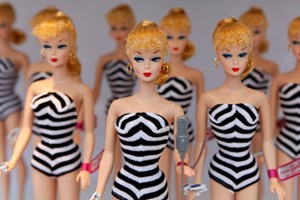 What's a listening machine? The example of everyone's lips was Hello Barbie, a version of the impossibly proportioned doll that will listen to your child speak and respond in kind.

Barbie accomplishes this magic by recording your child’s question, uploading it to a speech recognition server, identifying a recognizable keyword (“New York”) and offering an appropriate synthesized response. The company behind Barbie’s newfound voice, ToyTalk, uses your child’s utterance to help tune their speech recognition, likely storing the voice file for future use. And that’s the trick with listening systems. If you can imagine reasons why you might not want Mattel maintaining a record of things your child says while talking to his or her doll, you should be able to imagine the possible harms that could come from use — abuse or interrogation of other listening systems. (“Siri, this is the police. Give us the last hundred searches Mr. Zuckerman asked you to conduct on Google. Has he ever searched for bomb-making instructions?”)

As one of the speakers put it (we’re under Chatham House rules, so I can’t tell you who), listening machines trigger all three aspects of the surveillance holy trinity:

To reduce the creepy nature of their surveillant behavior, listening systems are often embedded in devices designed to be charming, cute, and delightful: toys, robots, and smooth-voiced personal assistants. Proponents of listening systems see them as a major way technology integrates itself more deeply into our lives, making it routine for computers to become our helpers, playmates, and confidants. A video of a robot designed to be a shared household companion sparked a great deal of debate, both about whether we would want to interact with a robot in the ways proposed by the product’s designers, and how a sufficiently powerful companion robot should behave.

If a robot observes spousal abuse, should it call the police? If the robot is designed to be friend and confidant to everyone in the house, but was paid for by the mother, should we expect it to rat out one of the kids for smoking marijuana? (Underlying these questions is the assumption that the robot will inevitably be smart enough to understand and interpret complex phenomena. What about security? One of our best speakers made the case that robots are very far from having this level of understanding, but that well-designed robots were systems designed to deceive us into believing that they had these deeper levels of understanding.)

Despite the helpful provocations offered by real and proposed consumer products, the questions I found most interesting focused on being unwittingly and unwillingly surveilled by listening machines. What happens when systems like ShotSpotter, currently designed to identify shots fired in a city, begins dispatching police to other events, like a rowdy pool party (just to pick a timely example)? Workers in call centers already have their interactions recorded for review by their supervisors — what happens when Uber drivers and other members of the 1099 economy are required to record their interactions with customers for possible review? (A friend points out that many already do as a way of defending themselves from possible firing in light of bad reviews.) It’s one thing to choose to invite listening machines into your life — confiding in Siri or a cuddly robot companion — and something entirely different to be heard by machines installed by your employer or by local law enforcement.

A representative of one of the consumer regulatory agencies in the United States gave an excellent talk in which she outlined some of the existing laws and principles that could potentially be used to regulate listening machines in the future. While the U.S. does not have comprehensive privacy and security legislation in the way many European nations do, there are sector-specific laws that can protect against abusive listening machines: the Children's Online Privacy Protection Act, the Fair Credit Reporting Act, HIPA, and others. She noted that electronic surveillance systems had been the subject of two regulatory actions in the U.S., where Federal Trade Commission protections against “unfair and deceptive acts in commerce” led to action against the Aaron’s rent-to-own chain, which installed privacy-violating software in the laptops they rented out, capturing images of anyone in front of the camera.

FTC argued that this was a real and concrete harm to consumers with no offsetting benefits, and Aaron’s settled, disabling the software. I found the idea that existing regulations and longstanding ideas of fairness could provide a framework for regulating listening machines fascinating, but I'm not sure I buy it. Outside of the enforcement context, I wonder whether these ideas provide a robust enough framework for thinking about future regulation of listening systems, because I’m not sure anyone understands the implications of these systems well enough to anticipate possible futures for them. A day thinking about eavesdropping dolls and personal assistants left me confident only that I don't think anyone has thought enough about the implications of these systems to posit possible, desirable futures for their use.

Over the past thirty or more years, we’ve seen a particular Pushmi-Pullyu pattern of technology regulation, to borrow a species from Doctor Doolittle. Companies invent new technologies and bring them to market. Consumers occasionally react, and if sufficient numbers react loudly enough, government regulators investigate and mandate changes. There’s a sense that this is the correct process, that more aggressive regulation would crush innovation before inventors could show us the benefits of their new ideas. But this is a model in which regulation is a very modest counterweight to market forces. So long as a product is on the market, it’s engaged in persuading people that a new type of behavior is the new normal.

When Apple brought Siri to market, it engaged in a multi-front campaign to persuade people that they should regularly speak to a computer to make appointments, order dinner, check traffic conditions, and seek advice. Apple was able to lower barriers to adoption by making the product a pre-installed part of their very popular phone, making it available for free, and heavily advertising the new functionality. Even the wave of jokes about the limits to Siri's speech recognition capabilities and feature films that seek to complicate our relationships with digital entities serve the purpose of calcifying "the new normal," this idea that people talk to their phones and share sensitive information with them, and that's just the way things are now.

Perhaps at some point, we’ll see a lawsuit challenging Apple’s use of Siri data. Perhaps Apple will offer different financing packages for a future iCar with lending rates determined by a personality profile generated, in part, by a purchaser’s interactions with Siri. Empowered by the Fair Credit Reporting Act, regulators might get involved and demand that credit decisions be made only using transparently disclosed, challengeable fiscal data, not correlations between one’s taste in takeout food and creditworthiness. Fine. But in the ensuing years, Apple has already won: We're talking to our phones, sharing our lives, generating terabytes of data in the process. The problem with this approach to regulation is that we rarely, if ever, have a conversation about the technological world we’d like to have.

Do we want a world in which we confide in our phones? And how should companies be forced to handle the data generated by these new interactions? (At the Listening Machine Summit, smart policy people in the room had suggestions like “robot privilege.” Such protection would behave like attorney/client privilege — prohibiting law enforcement from luring robots into making a person testify, requiring in-line “visceral” notice of privacy risks in these systems, banning price discrimination based on privacy protected data, and reforming the “third-party directive.”) These questions, a friend points out, aren't regulatory questions, but policy ones. The challenge is figuring out how, in our current, barely functional political landscape, we decide what technologies should trigger pre-emptive conversations about whether, when, and how those products should come to market.

If my example of Siri affecting your credit score seems either fanciful or trivial, consider the NSA's expansive data collection programs as revealed by Edward Snowden. Again, we're seeing pushmi-pullyu regulation in which branches of the intelligence community got out way ahead of popular opinion and congressional oversight, and is only now being modestly pulled back.

There's encouraging news from the world of synthetic biology, where a powerful new technology for gene manipulation called CRISPR is promising to revolutionize the field. CRISPR makes it vastly easier to cut the DNA within an organism, which allows biologists to remove genes they don't want and add genes they do. (Turns out that the cutting is the hard part: DNA's self-repair mechanisms mean you can introduce sequences you’d like incorporated within DNA, and the cell’s DNA-patching systems will include your sequence as a patch.) By itself, CRISPR is provoking lots of thought about what sorts of genetic manipulation are appropriate and desirable. But a further idea — the gene drive — is leading to impassioned debate within the scientific world.

It's possible to make CRISPR inheritable, which means that not only can you change the genome in an organism, but you can make it virtually certain that its offspring will inherit the genomic change. (Inherited changes generally propagate slowly through a population, as only half the offspring inherit the change. But if you make a change on one half the chromosome and put CRISPR on the other half, the offspring either inherits the changed gene, or CRISPR, which will then make the change.) The upshot is that it could well be possible to engineer a species of mosquitoes that couldn't pass on malaria, or that simply couldn't reproduce, ending the species as a whole. But who gets to make these decisions?

The good news is that there's both a precedent of executive authority to ban certain lines of research, and a robust tradition of debate within the scientific community that seeks to influence this policymaking. Smart people are making cases for and against gene drive, and I've had the pleasure of talking to scientists trying to make gene drive possible who are genuinely thrilled to be having public conversations about whether, when, and how the technology should come into play. We need a better culture of policymaking in the IT world. We need a better tradition of talking through the “whethers, whens, and hows” of technologies like listening machines. And we need more conversations that aren’t about what’s possible, but about what’s desirable. Experts have to provide people the highest level of security.