South Korea's beleaguered spy agency has acknowledged exploring the purchase of technologies to intercept communications on smartphone chatting services, but maintains it only intended to strengthen its monitoring of rival North Korean agents, not South Koreans, lawmakers said. 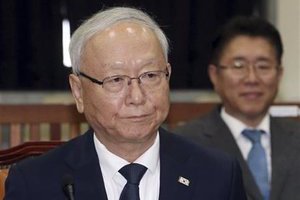 The revelation is sensitive because the country's spy agency has a history of illegally tapping South Koreans' phone conversations.

National Intelligence Service chief Lee Byoung Ho told legislators in a closed-door briefing that the security agency bought hacking programs from an Italian company, Hacking Team, in 2012 that were designed to intercept information from cellphones and computers, according to details released to reporters by the office of lawmaker Shin Kyung-min, who attended the meeting. Lee didn't indicate whether the agency obtained the technology for hacking Kakao messenger, but he acknowledged that it asked Hacking Team about getting such technology, according to Shin's office. The spy agency didn't immediately return calls seeking comment.

Lee said the hacking programs bought from Hacking Team would be ineffective for spying on civilians because the NIS only received enough to monitor 20 different devices at once. He said the programs have been used mainly for security research as the country looks to strengthen its cyberwarfare capabilities against North Korea, which Seoul blames for repeatedly attacking Internet networks and stealing information from computers, Shin's office said.

Lee also told lawmakers that the programs the NIS purchased from Hacking Team were used by 97 intelligence and investigation agencies in 35 countries around the world. Lee said there are hacking tools that could infiltrate mobile devices without going through the servers.

The story emerged earlier this month when a searchable library of a massive email trove stolen from Hacking Team, released by WikiLeaks, showed South Korean entities were among those dealing with the Italian surveillance firm. Two previous NIS directors, who successively headed the spy service from 1999 and 2003, were convicted and received suspended prison terms for overseeing the monitoring of mobile phone conversations of about 1,800 of South Korea's political, corporate and media elite.

Earlier this year, another former NIS chief was sentenced to three years in prison after being found guilty of ordering an illicit online campaign to support then-ruling party candidate and current President Park Geun-hye ahead of the 2012 presidential election. The spy service has previously countered that its agents were only trying to cope with North Korean cyberwarfare by posting comments meant to counter messages that praised the North and spread groundless rumors about South Korean government policies.