Apple will choose instead of you 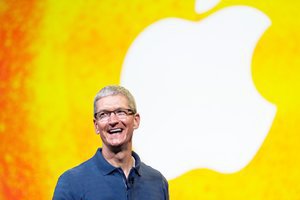 In a patent application filed today, Apple proposes a new e-commerce system that uses a mobile phone to deliver targeted ads to users based on what they can actually afford.

This new patent comes on the heels of another recent in-development project for creating and tracking ads — and the Apple users who look at them — based on social media content that goes viral. Apple describes its new ad format as having one key improvement over regular mobile advertising: An advantage of such targeted advertising is that only advertisements for goods and services which particular users can afford, are delivered to these users.

Broken down simply, the system sits on your phone, tracks the status of your credit or debit cards, sees what the balance on them is, and then targets ads at you based on what you can actually afford. This is a genuinely innovative marketing idea, as ads today are currently targeted at you based on what advertisers would like you to buy — not what you're actually able to buy. Here is the key language:

[T]he delivery element is arranged such that the content item [ad] delivered to the user includes only one or more objects having a purchase price less than or equal to the available credit for that user.

... An advantage of such targeted advertising is that advertisements for goods and services which particular users cannot afford, are not delivered to these users.

... This would be appropriate when presenting, for example, items offered by an online shop which can be ordered immediately. The items that the user can currently afford, i.e., they have available credit in an amount greater than the purchase price of each item, may be marked with a marker while those the user cannot afford would not be so marked. Alternatively, ... [the new system could arrange products on your screen] such that affordable items are shown on one side of the mobile terminal's display screen, e.g., at a top of the screen, and others are shown on the opposite side, e.g., at a bottom of the screen.

Further, the system proposes a billing/payment system for people who respond to the ads, "subsidized or free telephone services to the users" who agree to be targeted with such ads, and a delivery method so users can click to buy and receive goods either digitally on their phones or physically at home. The system even proposes building in a percentage margin so that goods are only advertised if they are within 90% of a consumers' balance, leaving 10% on the card. Apple didn't comment.

It is worth noting at this point that Apple is not likely to launch this as a product the way it is described in the patent documents. Apple historically has targeted upper-income users and has never been interested in the kind of customer who wants a free phone in exchange for looking at ads. And, of course, Apple's developers come up with all sorts of ideas that the company patents but never actually produces.

It is also probable that the credit data being used as a targeting mechanism can be "hashed," encrypted and isolated on each users' phone — so that even if Apple did use it as a targeting mechanism for ads the advertisers themselves may never actually see it. Apple Pay works a bit like that now (your credit cards are turned into an encrypted token that never leaves your phone, making it safe and reducing the data you give to retailers when you spend). And most online advertising follows a similar principle — hashed data tells advertisers that you are only one of thousands of anonymous people who are in a certain age bracket, with certain interests, and a certain history.

The patent is nonetheless interesting because it contradicts several recent statements from CEO Tim Cook, who has said that Apple is not interested in monetising the private data of its users. Back in September 2014, he said he was "offended" by companies that did that. "Our business is not based on having information about you. You’re not our product. ... if they’re making money mainly by collecting gobs of personal data, I think you have a right to be worried," he told Charlie Rose.

In February, talking about Apple Pay, Cook said, "When you add a card to Apple Pay your actual card numbers are never stored in the device or servers. For every payment we create a unique one-time code that is only good for that one transaction from that one device. We don't store those transactions. They remain between you, the merchant, and your bank. We don't know your card number or what you bought or how much you paid. And we don't want to."

And earlier this month Cook said, "some of the most prominent and successful companies have built their businesses by lulling their customers into complacency about their personal information. They're gobbling up everything they can learn about you and trying to monetize it. We think that's wrong. And it's not the kind of company that Apple wants to be." So the takeaway here is that while Apple isn't launching products that monetize your data, it sure is able to if and when it wants to. That is important because most people forget that Apple is the owner of the largest collection of credit card numbers on the planet, approaching 1 billion accounts in 2014, more than Amazon.

OUR POINT
Apple has recently announced $9 billion investment to build a stronger cloud infrastructure. It’s even difficult to imagine what funds Google, Amazon, Facebook invest in cloud-based services. The rapid development of foundation (bulk data collection) and the parallel process of improvement  of Big Data technologies determine the future of humanity. The global system is going to know almost everything about each person. Actually, it is possible to delay the moment when your data will not be yours only. It is not a question, Will the total control system happen? The question is, When will the total system take control over every second of our life?

And still people can make their life, communication, and emotions private instead of giving it to different systems and trends.
Teams of cryptographers are improving information security to protect people from Big Brother all over the world.
One of the results of this activity of a highly professional team is SafeUM secure messenger. We provide you with the higest level of security.
Tags:
Apple trends
Source:
Business Insider
2391
Other NEWS
3 Jul 2020