Inquiry sought in Hillary Clinton’s use of email

Two inspectors general have asked the Justice Department to open an investigation into whether sensitive government information was mishandled in connection with the personal email account Hillary Rodham Clinton used as secretary of state, senior government officials said. 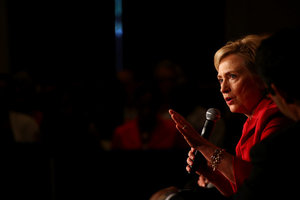 The request follows an assessment in a June 29 memo by the inspectors general for the State Department and the intelligence agencies that Mrs. Clinton’s private account contained “hundreds of potentially classified emails.” The memo was written to Patrick F. Kennedy, the under secretary of state for management.

It is not clear if any of the information in the emails was marked as classified by the State Department when Mrs. Clinton sent or received them. But since her use of a private email account for official State Department business was revealed in March, she has repeatedly said that she had no classified security information on the account. The initial revelation has been an issue in the early stages of her presidential campaign.

The Justice Department has not decided if it will open an investigation, senior officials said. A spokesman for Mrs. Clinton’s campaign released a statement on Twitter on Friday morning. “Any released emails deemed classified by the administration have been done so after the fact, and not at the time they were transmitted,” it read.

At issue are thousands of pages of State Department emails from Mrs. Clinton’s private account. Mrs. Clinton has said she used the account because it was more convenient, but it also shielded her correspondence from congressional and Freedom of Information Act requests. She faced sharp criticism after her use of the account became public, and subsequently said she would ask the State Department to release her emails.

The department is now reviewing some 55,000 pages of emails. A first batch of 3,000 pages was made public on June 30. In the course of the email review, State Department officials determined that some information in the messages should be retroactively classified. In the 3,000 pages that were released, for example, portions of two dozen emails were redacted because they were upgraded to “classified status.” But none of those were marked as classified at the time Mrs. Clinton handled them.

On Monday, a federal judge sharply questioned State Department lawyers at a hearing in Washington about why they had not responded to Freedom of Information Act requests from The Associated Press, some of which were four years old.

“I want to find out what’s been going on over there — I should say, what’s not been going on over there,” said Judge Richard J. Leon of United States District Court, according to a transcript obtained by Politico. The judge said that “for reasons known only to itself,” the State Department “has been, to say the least, recalcitrant in responding.”

Two days later, lawmakers on the Republican-led House committee investigating the Benghazi attacks said they planned to summon Secretary of State John Kerry’s chief of staff to Capitol Hill to answer questions about why the department has not produced documents that the panel subpoenaed. That hearing is set for next Wednesday.

“The State Department has used every excuse to avoid complying with fundamental requests for documents,” said the chairman of the House committee, Representative Trey Gowdy, Republican of South Carolina. Mr. Gowdy said that while the committee has used an array of measures to try to get the State Department to hand over documents, the results have been the same. “Our committee is not in possession of all documents needed to do the work assigned to us,” he said.

The State Department has sought to delay the hearing, citing continuing efforts to brief members of Congress on the details of the nuclear accord with Iran. It is not clear why the State Department has struggled with the classification issues and document production. Republicans have said the department is trying to use those processes to protect Mrs. Clinton.