Spy software gets a second life on Wall Street

Spies are infiltrating Wall Street. A wave of companies with ties to the intelligence community is winning over the world of finance, with banks and hedge funds putting the firms’ terrorist-tracking tools to work rooting out employee misconduct before it leads to fines or worse. 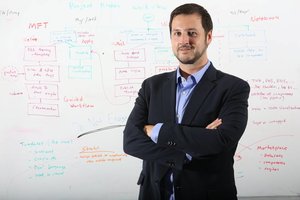 “Both Wall Street and the intelligence world want the same thing: to find unknown unknowns in the data,” said Roger Hockenberry, the former chief technology officer of the Central Intelligence Agency’s clandestine services and now a partner at the consulting firm Cognitio Corp. in Washington.

“Financial firms aren’t looking for terrorists, but good customers and attempts at fraud,” he said. The CIA gave many of these companies their big break: After the terror attacks of September 2001, a private-equity arm of the CIA known as In-Q-Tel began seeding companies that could help it sift through vast repositories of data to quickly identify threats. Those skills have become more valuable on Wall Street as firms try to keep up with rogue traders in increasingly complex and rapidly moving markets.

Of 101 companies publicly seeded by In-Q-Tel, 33 have taken on Wall Street clients in recent years, according to a review. A spokeswoman for In-Q-Tel declined to comment. Other companies in this field include Palantir Technologies Inc., which helps government and Wall Street clients analyze their data; Recorded Future Inc., which monitors the Internet for coalescing cybersecurity threats and other events; and Domino Data Labs Inc., which provides the plumbing for firms to do data analytics.

Palantir raised $450 million last week at a valuation of about $20 billion. Since 2009, it has received more than $215 million in contracts with the Federal Bureau of Investigation, the Defense Department and the Department of Homeland Security, according to USAspending.gov, a federal site that publishes government contracts. The company, which got its start working for intelligence agencies, now says more than 60% of its business comes from commercial clients, particularly on Wall Street.

Another firm, a small technology company in Tennessee called Digital Reasoning Systems Inc., has counted Swiss bank UBS Group AG and New York hedge-fund firm Point72 Asset Management LLP as customers of data-combing software the U.S. government has been using to track down enemies of the state. A fund managed by Credit Suisse Asset Management is an investor.

Tim Estes founded the firm that became Digital Reasoning in 2000 during his last year of college at the University of Virginia, where he studied philosophy. Conceived as a company specializing in “machine learning,” a branch of computer science dealing with programs that can learn from data and make better predictions, Digital Reasoning struggled during its first couple of years.

But one day in 2002, Mr. Estes landed a meeting at a nearby Army base. He demonstrated an early version of the software product that came to be known as Synthesys, showing how the company’s systems could read vast amounts of text and extract patterns and links not apparent to the human eye. That led to a pilot project and an initial government contract in 2004. The system became embedded in Army systems and was used in the field in Afghanistan, according to Digital Reasoning.

An In-Q-Tel investment in 2011 precipitated an even bigger mandate for Digital Reasoning from a wider swath of agencies, including the CIA. Located in a glassy office block on the outskirts of Franklin, Tenn., the firm’s staff of about 100 includes more than 30 employees with top-secret security clearance. Former Wall Street researchers and young technologists shuffle in and out of conference rooms named after locations from the “Lord of the Rings” trilogy.

“We see ourselves as the Darwinian outcome of billions of dollars of intelligence spending post-9/11,” says Mr. Estes, 36 years old. Digital Reasoning’s government work is classified but Mr. Estes said it involves things like “figuring out the aliases of certain people that were very hard to find in the data.”

Last year, Digital Reasoning raised $24 million from a group of banks led by Goldman Sachs Group Inc. and Credit Suisse. So far, it has publicized contracts to assist the compliance teams of UBS and Point72, the $11 billion firm run by Steven A. Cohen that was formerly known as SAC Capital. Point72 uses systems from Digital Reasoning in conjunction with those from Palantir to monitor roughly one million emails, instant messages and other electronic communications every week, according to Vincent Tortorella, the firm’s chief compliance and surveillance officer.

Systems from the two companies help “read, flag and risk-score emails,” which are then reviewed by a compliance group comprised of former employees of the CIA, FBI, Department of Homeland Security and the Securities and Exchange Commission, he said. Mr. Cohen’s firm has been caught in regulators’ cross hairs in recent years for issues related to its oversight of employees. In 2013, SAC agreed to plead guilty to insider-trading charges, pay $1.8 billion in fines and stop managing money for outside clients. Mr. Cohen is still awaiting the outcome of a civil case for failure to supervise employees later found guilty of insider trading.

UBS, Credit Suisse and Goldman Sachs declined to comment. In pitching prospective clients, Digital Reasoning often shows a demonstration of how its system responded when it was fed 500,000 emails related to the Enron scandal made available by the Federal Energy Regulatory Commission.

After being “taught” some key concepts about compliance, the Synthesys program identified dozens of suspicious emails in which participants were using language that suggested attempts to conceal or destroy information. In some instances the program detected a lack of “business confidence,” which in the Enron case was primarily related to accounting practices.

The Synthesys system reads all the text files in a database, capturing metadata and creating links between people and institutions. Words are given sentiment scores to help detect emotion. The end result is an application that can be used to look at the data from many perspectives. With training, the system can identify situations in which people are using code words for something nefarious, said Matthew Russell, the firm’s chief technology officer and a former intelligence officer in the U.S. Air Force.

For example, an extremist group might refer to bombs as wedding cakes and bombings as weddings. In finance, the system might look for “gift-giving” language, such as a discussion of seats at a sporting event or other event. The software might also monitor for attempts to conceal information, phrases that seem to be pressuring someone to do something or expressions of anger. Some institutions search for words or phrases that show a lack of confidence around a decision, which could suggest they are wading into gray area. Digital Reasoning is already in discussions with financial clients about the next phase of analysis after compliance solutions: increasing revenue.