Google’s Project Loon has brought the concept of beaming wireless Internet from the sky into industry discourse, and now Samsung has published a research paper that considers using thousands of satellites to connect the two-thirds of humanity without access. 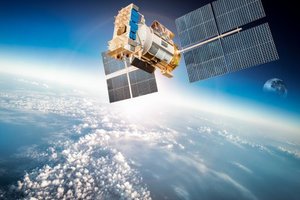 Farooq Khan, Samung’s president of research and development based in Richardson, Texas, laid out the premise in a research paper titled “Mobile Internet from the heavens.”

According to the paper, the low-Earth orbit satellites could provide mobile data capacity equivalent to 200 gigabytes per month for 5 billion users around the globe; each satellite would be capable of providing terabit per second data rates “with signal latencies better than or equal to ground based systems.” So where does all that capacity come from? Khan looks ahead to the still developing “5G” standard, particularly accessing higher band spectrum.

“In order to address the continuously growing wireless capacity challenge, the author and his colleagues pioneered use of higher frequencies referred to as millimeter waves with a potential availability of over 100 gigahertz spectrum for 5G mobile communications,” the paper states.

“At millimeter wave frequencies, radio spectrum use is lighter and very wide bandwidths along with a large number of smaller size antennas can be used to provide orders of magnitude increase in capacity needed in the next 15 to 20 years. Moreover, in order to connect the remaining two-thirds of the humankind that currently does not have access to the Internet, we will need to complement cellular and Wi-Fi networks with satellites and other aerial systems such as those using unmanned aerial vehicles.”

Prior to publication of the paper, Khan was a panelist at National Intrument’s annual NI Week in Austin, Texas. He spoke expansively about the transformative potential of global connectivity, as well as the restrictive policy governing spectrum allocation and other topics related to 5G and the “Internet of Things.” Throughout the paper, Khan emphasizes the need to minimize infrastructure costs and projects that by 2028 both cellular and Wi-Fi will carry more than one zettabyte per month of data, therefore the “space Internet” would need “similar capacity.”

“This space Internet can then provide back-haul for cellular and Wi-Fi as well as direct communication with the satellite connecting the world’s population currently without Internet access. With the satellite-based backhaul, cellular and Wi-Fi deployments become practical in remote regions of the Earth where there is no wired Internet infrastructure.” As for satellites, Khan projected the requirement at 4,600 units. The new wireless architecture is called MCC or multicomm-core.