Vint Cerf is known as a "father of the Internet," and like any good parent, he worries about his offspring -- most recently, the IoT. 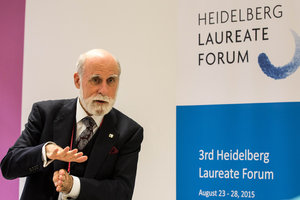 "Sometimes I'm terrified by it," he said in a news briefing Monday at the Heidelberg Laureate Forum in Germany. "It's a combination of appliances and software, and I'm always nervous about software -- software has bugs."

The Internet of Things will offer the ability to manage many of the appliances we depend on, acknowledged Cerf, who won the Turing Award in 2004. With its ability to continuously monitor such devices, it also promises new insight into our use of resources, he said. Devices such as Google's Nest thermostat, for instance, can "help me decide how well or poorly I've chosen my lifestyle to minimize cost and my use of resources -- it can be an important tool," he said.

As with so many technological tools, however, there are plenty of potential downsides. Safety is one of them. Cerf is now vice president and chief Internet evangelist at Google, but you won't find him enjoying any of the massage chairs the company provides for its employees. "I know they're run by software -- I worry they will fold up on me," he quipped.

As more such appliances are run by software, people will be increasingly reliant on programmers' ability to write good code, he pointed out. "It's fraught with issues, some technical and some legislative," he said. "Who is liable when an appliance doesn't work the way it should, and what if that's a software question?"

Then, too, there's the possibility that information from the IoT will fall into the wrong hands. Even data from a device like Nest could be used for nefarious purposes by would-be burglars, Cerf said, such as to learn how many people live in a house and figure out when they're not home. Strong authentication protocols will be essential to keeping data safe, he said, but it will also be important to give users the flexibility to share access if they wish, such as with providers of security systems.

Access must be under the user's control, but it won't always be easy to distinguish the "right" from the "wrong" hands. "Say the house is on fire," Cerf said. "It would be helpful if the fire department could figure out how many people are in the house and what rooms they're in." Standards will be another essential component in the Internet of Things, Cerf added.

"If everything is separate and there's no standardization, we'll need different control and monitoring systems for everything," he explained. "I don't want seven different hubs and systems to control all the pieces in my house." It should be mentioned that a new HP study found that 100 percent of the studied devices used in home security contain significant vulnerabilities, including password security, encryption and authentication issues.