"Hey Siri, it looks like I can activate you by voice whether or not my new iPhone 6S is plugged in." "Yes, that's right. Thank you for noticing." 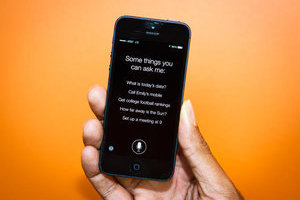 Well, that's not an actual conversation I had with Siri, but it could have been. With the launch of the new iPhone 6S and 6S Plus, Apple's voice assistant has been beefed up with a helpful new feature, namely always-on voice activation.

The "Hey Siri" feature lets you activate Siri just by saying, you guessed it, "Hey Siri," eliminating the need to hold down the Home button or raise the phone to your mouth to wake up the voice assistant. But "Hey Siri" has one limitation. Your current iPhone has to be connected to a power source for "Hey Siri" to work. But with the new iPhone 6S and 6S Plus, the feature will always be on, so you can activate Siri by voice whether your device is plugged in or running off the battery.

And it's about time Siri expanded its capabilities. Siri faces competition from Google Now and Microsoft's Cortana, both of which also offer voice activation. Google and Microsoft continue to improve their Siri alternatives with features that Apple hasn't been able to match in the past. Google Now, for example, can automatically present users with contextual cards relaying useful info, and the company in late May revealed its upcoming Google Now On Tap, which is a sort of "Help me, Google" button that tries to bring you information before you ask for it.

And Microsoft's Cortana is headed toward iOS owners. A Cortana companion app already rolled out to Android phones at the end of June and will reach iPhones later this year. Cortana can remind you of meetings, air flights and other activities in your schedule.

But Siri is expanding in ways beyond just its "Hey Siri" feature. At its Worldwide Developers Conference in June, Apple revealed that with iOS 9, Siri will be able to remind you of appointments and other events without you having to tell it to. That's a key enhancement as it has also been one of the most unique features to Cortana. Siri will automatically process invitations with reminders, incorporate map-based information like driving directions and guess the identity of unknown callers from their phone numbers. It will also suggest apps based on your actions and do video searches across sites.

With the upcoming changes to Siri, Apple's mobile OS will be more proactive. Siri will remind you of things based on the time of day or your location. For example, you can say something to Siri like "Remind me about this when I get home," and it will remind you about whatever you may be viewing on your iPhone. Siri can even know what you're up to. You can tell it to "Remind me to take my coffee off my roof when I get in my car," and it should do just that.

Every second huge information streams from iPhones all over the world are sent to Apple servers or even somewhere else. Moreover, the low price of data storage + constantly improving technology of huge volumes of information processing (Big Data). That's it. Let’s say “Hello” the world of mass surveillance and total control. Corporations proudly advertise spying features of continuously tracking gadgets. One can only be surprised that people don’t care about privacy that's dying.

Here's Siri based lifehack for you: if you want to have 100% guarantee that your data is between you and your interlocutor, don’t say it, use SafeUM encrypted chat instead.
Tags:
trends Siri Apple
Source:
CNet
2749
Other NEWS
3 Jul 2020