The Indian government faced a wave of outrage due to controversial clauses in a recently published draft of its new National Encryption Policy. 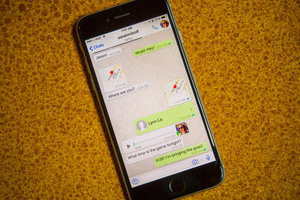 The policy draft, written by the Department of Electronics and Information Technology, stipulated that mobile users in the country would be legally required to store any encrypted communications on their devices for up to 90 days -- and could be punished if they failed to comply.

Almost every Internet-based method of communication uses some level of encryption. This means that deleting messages that are less than three months old from widely used instant messengers, like WhatsApp, Viber and Hike, as well as from e-mail clients such as Gmail, would be illegal. "All information shall be stored by the concerned [organisations/citizens] entity for 90 days from the date of transaction and made available to Law Enforcement Agencies as and when demanded in line with the provisions of the laws of the country," the draft read.

However, following public and social media outcry, an amendment was made excluding "mass encryption products" like the above mentioned services from the policy. Another controversial measure that was outlined in the original draft stated that all services that offer encrypted communications were to alert themselves to the government.

"All vendors of encryption products shall register their products with the designated agency of the Government," it read. "While seeking registration, the vendors shall submit working copies of the encryption software / hardware to the Government along with 4 professional quality documentation, test suites and execution platform environments."

The draft policy is likely to change more, as the department has opened it up for public comment until October 16. It comes months after the issue of net neutrality was a hot topic in India. At the heart of the debate was telco Airtel, who attempted a zero-rating plan which involved select sites, like e-retail giant Flipkart, becoming data-free for customers, which some cited as anti-competitive practice.

OUR POINT
It is difficult to imagine how Indian government understands the way this initiative can be realized in real time. Where can any user get his encrypted texts? How will any user store sent and encrypted messages? What if the phone memory is low? Moreover, does it mean that I can’t delete any message from my chat on my phone? SafeUM secure messenger will help you in this Orwell situation. SafeUM has a unique feature: different levels of application access, depending on the entered PIN-code.

It is better to use the second registration option in such cases. You won’t have to provide your phone number, email, and any other personal information. The ability to stay anonymous is integrated in SafeUM. Download SafeUM, use additional data protection features and rest assured your communication is 100% private.
Tags:
India surveillance
Source:
CNet
2129
Other NEWS
3 Jul 2020