The FBI has recovered private emails from Hillary Clinton's server

The FBI has recovered emails from a private server used by Hillary Clinton while secretary of state that she said were deleted because they involved personal matters, according to a source familiar with the investigation. 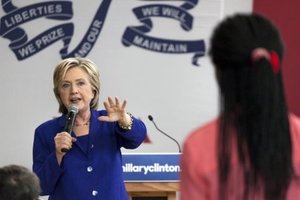 The FBI is examining the server to see whether any information, including classified data, was mishandled, the investigation would take at least several more months.

It was not clear how many of the personal emails had been recovered. Clinton spokesman Nick Merrill, asked about the report, said, "We've cooperated to date and will continue to do so, including answering any questions about this that anyone including the public may have." The FBI did not immediately respond to the report. Clinton's use of her private email for her work as America's top diplomat came to light in March and drew fire from political opponents who accused the Democratic presidential front-runner of sidestepping transparency and record-keeping laws.

She also has been heavily criticized by congressional Republicans who have raised questions over whether the private server jeopardized the security of sensitive data. The controversy has cut into Clinton's lead in the race for the Democratic nomination for the November 2016 election. Clinton has apologized for using a private server rather than the government system but has said she sent no information by email that was classified at the time and received no material marked that way.

Last December, she provided what she said were copies of all the work emails she had in her possession, nearly two years after she stepped down as secretary of state. She handed over about 30,000 emails she sent and received, though her staff has since acknowledged that some work emails are missing. She did not hand over another 30,000 emails from the period that she deemed personal and said she chose "not to keep."

The company that managed Clinton's private email server said it had "no knowledge of the server being wiped," indicating that tens of thousands of emails Clinton said were deleted could be recovered. The State Department has been releasing the emails to the public in keeping with Clinton's request after redacting parts of them to remove sensitive or classified information.