When I was growing up, my parents would often embarrass me in front of future ex-girlfriends as well as my friends by pulling out photo albums compiled of photos from my early childhood. 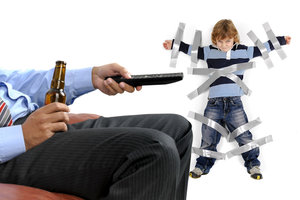 In those days, candid pictures, weird faces and random acts of silliness were captured in all of their awkwardness. Preserved if you will for parents to share in a brag book or album in the privacy of their own homes.

Fast forward to today. We live in an age where we are connected to the Web nearly every waking hour and our photos are instantly shared on the Internet on sites like Facebook and Instagram. The big photo albums of the past have transitioned to digital identities tied to user handles or profiles. As a social media professional (and dad) who spends a lot of time within social networks, I often sit mouth agape at how much cooler people make themselves online and also how we’re setting up our children for torment later in their lives.

At their core, social media sites have made it easy to share our lives, moments and memories with our intimate networks. The downside is that with sharing as easy as it is, we humans don’t take that second to think about who we are really sharing with. While embarrassing pictures could be used against us in limited groups, photos nowadays can be used against our kids down the line by anyone who falls within a set of your network’s parameters.

Sure we signed up for these services, but did our kids? As parents (as well as friends and relatives) we need to collectively look at what we’re posting and stop posting things that can come back to haunt little Suzie or Jimmy decades down the road, especially these six things.

Raise your hand if you want that creepy guy down the street looking at pictures of your young daughter. I am pretty sure that there aren’t many people raising their hands right now. However if you have your Facebook or Instagram profile set as public, you are inviting everyone with an Internet connection to look through your pictures. It is not only stupid to have your profile set up like this, but also quite reckless.

Everyone is entitled to their own levels of privacy while using social networks. You should set your privacy to only offer access to those that you are really connected to. You can also change the privacy on a post by post level as well as what people can see and you should take extra care when it comes to your kids.

One of my biggest pet peeves when it comes to people sharing photos is when they take group shots and share them on social media sites. Parents have the right to know who can view and comment on pictures of their children. If they want to keep them off of social networks (as many of my co-workers do), it is their right as the parents – not yours. Why you shouldn’t put your children photos online?

Personally, it really bothers me when I see family members post a picture of my kids and someone I don’t know comments. In all honesty – I don’t know you, why are you commenting on a picture of my kid? I have had talks with family members and posted nasty comments to people posting who said something that I deemed out of line. We live in a weird world; you can never fully know everyone’s intentions or personal situations. Do you want to be the person who tips off an abusive parent as to where their estranged family is hiding from them?

3. Don’t create a profile for your kid

There is a woman who I actually had to unfriend on Facebook. The reason being was that she created a profile for her child on Facebook and incessantly tagged them in every post. There is a reason that you need to be over the age of X to set up a profile on the world’s biggest social network. Aside from the whole security thing, kids should decide if they want to open up their data to an advertising conglomerate.

While your kids may do absolutely cute things while in the bathtub, it is something that should be kept private. You don’t want people seeing your parts that you deem private would you? I didn’t think so. Just because they have mini-parts, it does not mean that you should have your kids nether-regions out there for the world to see. There are some really twisted people in the world who pay money to see photos like these. As responsible adults, we owe privacy to the children in our lives.

A few years ago, dog shaming became a thing. People thought it was so funny and elicited so many Likes, Shares and Comments that some decided to do the same to their kids. 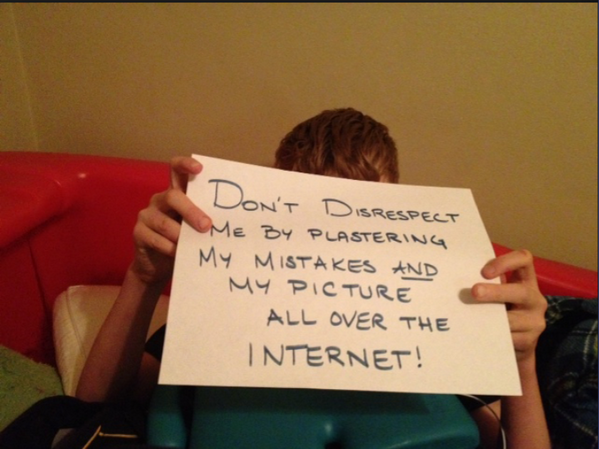 As a way to publicly shame their kids for doing something wrong parents would take a picture of their kid holding a sign or a picture of the kid getting publicly disciplined. Some people laughed. Others commented. The poster got their social verification or Internet high five. Their kid had their indiscretion shared with people that they may never meet – so not sure shaming really occurred. No lesson was really taught. This guy’s video went viral on the topic, but not for the reason that you’d think.

Pretty much sums it all up.

When I grew up in the 80’s & 90’s there were bullies. Everyone knew who they were and for the most part tried to avoid them. Unfortunately as our society has moved many of our activities to the web, we have lost the humanity that would have given pause before saying certain things – horrible things. It feels like you can’t go a week without reading about how online bullying led to a suicide.

Much like offline bullies from yesteryear, online bullies feed on fear and manipulation, however with online groupthink and slactivism can go hand in hand to make it a cool thing to make fun of or catfish little Jimmy from Holly Lane. A coworker let me in on anecdote that he had heard where an executive presented at their child’s school and when they pulled up their computer there was an embarrassing photo of the child on their desktop background that made the classmates snicker.

At that point, you can only imagine the realization that this goodwill presentation turned to anything else for their child. A classroom is at best 30 kids, but still stung. As evolving humans, kids don’t always make the best decisions. Should this picture have been online, the torment and embarrassment could have been much worse.

Lesson from this executive is that you should not offer things that could embarrass your child in the future unless you can control your audience – much like your parents did – which you can’t on the Internet. Everyone is entitled to the way that they want to rear their children. We simply ask that you think about the future and the lack of security inherently on social networks.