We have discussed several times about the cyber capabilities of the ISIS sympathizers, recently Mikko Hyppönen, Chief Research Officer for F-Secure, said he worries about cyber extremists that could penetrate critical infrastructure and cause serious damages. 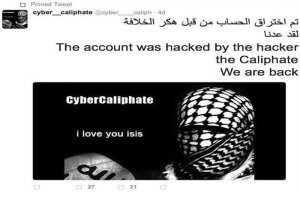 The expert explained that the ISIS is probably the first group of terrorist that has hacking capabilities to manage a major attack against a government infrastructure, and the situation is getting worse because this group is gaining greater awareness of the effectiveness of an offensive launched by the cyberspace.

Now ISIS hackers are in the headline once again, they collective known as the Cyber Caliphate has hacked tens of thousands of Twitter accounts, including the accounts belonging to several members of the CIA and the FBI, in revenge for the US drone strike that killed the British Jihadist hacker Junaid Hussain in August.

“Jihadis have hacked tens of thousands of Twitter accounts in retaliation for the drone attack that killed a British Islamic State extremist. A group called Cyber Caliphate, set up by Junaid Hussain from Birmingham, urged its followers to take control of the accounts to spread IS propaganda. Most of the victims appear to be based in Saudi Arabia, though some are feared to be British. In what experts described as a worrying escalation of the global cyber war, details of more than 54,000 Twitter accounts, including passwords, were posted online last Sunday.” reported experts.

The intelligence analysts believe that the Cyber Caliphate is a group of hackers directly linked to the ISIS terrorist organization and Junaid Hussain was one of its founders. The Cyber Caliphate is in hacking operation and propaganda on the Internet, it incites supporters and followers to hack Twitter accounts of Western Government and military organization in order to avenge the death of their brother.

The hackers hijacked more than 54,000 Twitter accounts, most of the accounts belong to users in Saudi Arabia. The hackers of the Cyber Caliphate leaked online personal information of the victims, including phone numbers and passwords, exposing them to serious risks. “I am horrified at how they got hold of my details.” said one of the victims.

Among the victims of the Cyber Caliphate, there are senior officials of the Central Intelligence Agency (CIA), the Federal Bureau of Investigation (FBI), and The United States’s National Security Agency. We are back,” Cyber Caliphate declared via Twitter through an account that has been already suspended.

In May, the hackers of the Cyber Caliphate published a video threatening crippling cyber attacks against the Europe, United States, Europe and Australia. The terrorists claimed to have the necessary cyber capabilities to spy on Western communications.

“The electronic war has not yet begun,” the pro-ISIS hackers boasted in their latest video threatening the cyberattacks. The group, which was involved in the hijacking of social media accounts belonging to the US CENTCOM, released a propaganda video threatening cyberattacks anticipating the operation of the terrorists on the Internet.

“Praise to Allah, today we extend on the land and in the internet. We send this message to America and Europe. We are the hackers of the Islamic State and the electronic war has not yet begun,” the video said with a distorted voice and picture of an Anonymous member. “What you have seen is just a preface of the future. We are able until this moment to hack the website of the American leadership and the website of the Australian airport and many other websites.”