New surveillance powers given to internet companies as part of the government’s Investigatory Powers Bill could have “very dire consequences,” the chief executive of tech giant Apple has warned. 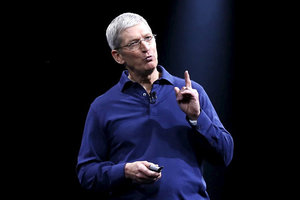 Tim Cook told the new legal obligation for companies to help security services bypass encryption would hurt “the good people,” rather than stopping those with nefarious intentions.

He added that communications companies need to have secure encryption services to protect their customers. “You can just look around and see all the data breaches that are going on. These things are becoming more frequent,” Cook told the paper. They can not only result in privacy breaches but also security issues. We believe very strongly in end-to-end encryption and no back doors. We don’t think people want us to read their messages. We don’t feel we have the right to read their emails.

“Any back door is a back door for everyone. Everybody wants to crack down on terrorists. Everybody wants to be secure. The question is how. Opening a back door can have very dire consequences,” he added. The new surveillance bill, unveiled last Wednesday by Home Secretary Theresa May, allows police and security services to hack into computers and phones in order access communications metadata.

The measures aiming to ban encrypted services could make Apple’s popular iMessage service illegal in Britain. Authorities will also be able to access individual’s internet browsing history without permission or a judicial warrant. Internet companies will be required to store “internet connection records” for a maximum of 12 months, which will give security services access to every website visited, but not the individual pages.

Cook suggested a mass movement could halt the implementation of the new measures. “When the public gets engaged, the press gets engaged deeply, it will become clear to people what needs to occur. You can’t weaken cryptography. You need to strengthen it. You need to stay ahead of the folks that want to break it.”