As a driver of technical innovation for a software company, a huge part of my job depends on forecasting how current tech trends will play out, merge, dissipate or expand. 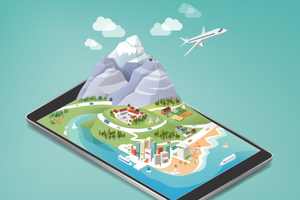 Here are some of my predictions of what the world will look like in 2020. The notions of ownership will be revised. Think of the things you use every day: your smart phone, your computer, your desk and so on. You own most — if not all — of those things.

However, in the future, you’ll probably share most of them. We’ve recently seen a huge rise in the sharing economy; not only can you stay in someone else’s house via Airbnb, but you can sail in someone else’s boat through Sailo, fly in someone else’s private plane via OpenAirplane and go snowboarding with someone’s else’s board via Spinlister. This is only the first wave. Major players like Google, Apple and Uber are developing car technology so that, in five years, rather than driving to the office in a car you own, you’ll drive to work in a car you ordered on your cell phone that morning. If you wanted, you could drive a different make and model every day.

Oh, and that office? Not only has it been chosen to be optimally located for you and the co-workers you need to meet with, but it’s pre-loaded with your information and work preferences. The sharing system is far more efficient, as it enables resources to be active 24/7 rather than just when we’re personally using them. And because everything will be tailored to our needs and desires, we’ll still feel like what we’re using is “ours.”

In the past, we relied solely on keyboards to control our devices. Then, speech recognition technology came along, and now has improved to the point where we don’t have to touch our gadgets if we don’t want to. The next logical progression is mind-controlled technology. Scientists have already developed prosthetics that amputees can operate with their brains. A new wireless transmitter allows paralyzed patients to control their TVs, computers and wheelchairs with their thoughts. In the future, I believe these brain-computer interfaces will be universal. Rather than say, “Hey, Siri,” you’ll think, “Hey, Siri.”

Some of the most promising players in this area right now include Emotiv, a bioinformatics company using EEG technology to develop brain-computer interfaces, and BrainGate, a research team that’s created a wireless transmitter for paralyzed patients. Furthermore, the Federal Institute of Technology in Lausanne has developed “shared control” technology that augments EEG and gives paralyzed people even more mobility with their wheelchairs.

Right now, there’s a lot of excitement about the Internet of Things. We’re connecting everything: your thermostat, your refrigerator, your car, your garage, your garden… That means lots of sensors and meters. We’ll be measuring, tracking and analyzing even more than we already do. But in 10 years, as it matures, we’ll see this connected ecosystem simplify.

Rather than gauging if the toilet has enough water, the soap bottle is full enough and the lights are the perfect level, your smart bathroom can ask, “How was your visit?” You can say “Good,” or perhaps, “Bad —  there wasn’t enough soap.” This eliminates the need for so much tracking, and makes the experience feel more human. Ultimately, our devices will rely on our feedback just as much as data. Luigi Atzori, Antonio Iera and Giacomo Morabito, senior members of the Institute of Electrical and Electronics Engineers, are among those calling for a more “social” IoT.

Thanks to the relative ease of travel and the ubiquity of social and communication apps, we already live in a globalized world. The challenge is taking a global presence and adapting it to each region. In the future, everything will be “glocal:” a localized version of a global trend. A current example of this is playing out with Uber in India. Because Indian consumers tend to care more about getting to their destination for a good price rather than “in style,” Uber launched a rickshaw-on-demand service in Delhi. And to get around government regulations, Delhi users can pay for their rides in cash. Five years from now, companies will have to go glocal if they want to survive.

But VR itself will have changed. Rather than being an alternate reality, it’ll be incorporated into your existing reality. Say goodbye to bulky, wrap-around goggles that close you off from the external world. Say hello to discreet technology that puts you in an immersive 3D VR environment with an unimpeded view of the surrounding environment and a broad field of view.

There are current initiatives to develop low-cost, augmented-pixel technology that’s far less isolating. In addition, Magic Leap, an American startup that’s raised more than half a billion dollars in funding, has also hinted that its launch product won’t require a screen. In 2020, after becoming non-invasive, VR will integrate into many facets of our life, from entertainment and education to work and exploration.

Between new definitions of “yours” and “mine,” new ways to control our devices, new mechanisms for streamlining IoT, new requirements for being local and global and new advancements in virtual reality, we’ve got lots of change coming. There’s no doubt about it —  2020 will be an exciting time.