Windows 10 is possibly making unwanted changes to your gaming rig. 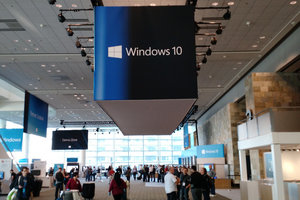 Microsoft’s first big update for its operating-system-as-a-service is deleting some user-installed apps without asking Windows owners for permission, according to dozens of complaints on message boards and forums.

The affected programs include hardware monitoring tools CPU-Z and Speccy as well as the AMD Catalyst Control Center for tweaking your Radeon graphics cards. In all of these instances, it seems that the programs no longer functioned properly with the newest version of Windows 10, and the apps were often causing crashes and the blue screen of death. So, to deal with that problem, the Windows update removes the active versions of these programs and files them away in your “Windows.old” folder where they can do no harm.

While this may help most people who don’t want to deal with troubleshooting their system, some PC powerusers are taking issue with Windows 10 removing software without asking. Here’s how poster Bright-Spark on the Windows 10 Reddit forum put it: “Microsoft should ask for permission, and not for forgiveness. I would be fine with it if Windows 10 said ‘Hey, this application can cause problems and we recommend that you uninstall it. Do you want us to do that for you?’ and then shuts it’s mouth about it if you say ‘No,’ but they shouldn’t just uninstall it without prior warning.”

Since the update starting rolling out, some people have tried reinstalling CPU-Z, Speccy, and AMD Catalyst Control Center without issue. We’ve also seen that not everyone with these apps installed saw them removed when they installed with Windows 10 patch. Microsoft declined the opportunity to comment on this story.

But the company has previously explained to GamesBeat that it would remove software that it considers dangerous. That includes not just programs that will cause issues with Windows 10 but potentially apps that may steal your information or infect your system. That language is in Microsoft’s terms of service. Even when told not to, Windows 10 just can’t stop talking to Microsoft.

“The Microsoft Services Agreement allows Microsoft to change or discontinue certain apps or content where we deem your security is at risk,” a Microsoft spokesperson told GamesBeat in August. “Software that is pirated or botted places the safety and security of our customers at risk, including a higher risk of malware, fraud, public exposure of personal information, and poor performance or feature malfunction. We remain committed to protecting our customers from the risks of non-genuine software and protecting the intellectual property of developers of all types of content.” By using Windows 10, you agree to give Microsoft the power to make those changes. But that doesn’t mean PC owners have to like it.